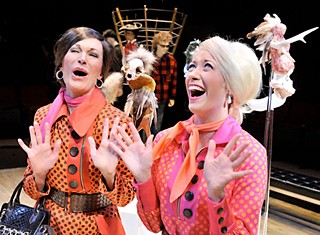 The experiment begins as soon as one enters the theatre, which, thanks to scenic designer Leilah Stewart, properties designer Rachel Magee, and lighting designer Kathryn Eader, feels just like walking into an actual museum exhibit. Every detail, from the pedestals on which the curious "statues" are perched to the benches that demarcate the outside walls of the gallery, is right on. We're given just enough visual information during this preshow to get our gears turning, but we have no idea what's to come. And then, the chaos begins.

Turns out that it's the last day of this contemporary exhibit, titled "The Broken Silence." The Guard assigned to maintain that silence is frequent MMNT actor Jarrett King, and he has a lot on his hands: More than 40 personalities make their way through the exhibit in the show's action-packed 90 minutes, and King offers up a fantastic character arc that serves as the Krazy Glue binding together an überwacky script. Fluttering through the premises faster than you can count them are caricatures of almost every archetype imaginable – whew! – including valley girls, pretentious snobs, the ladies who lunch, thieves, hippies, hipsters, and the token bitchy, limp-wristed, modern-art-philic couple, played to a tee by the hysterical David Stahl and Curtis Allmon.

All involved, from freshmen to Equity guest artists King, Stahl, and the equally hilarious Babs George, are quite good here. It's a fast, over-the-top romp with pacing that's kept necessarily quick but steady by director David M. Long. Susan Branch Towne's costumes play their own characters, doing as much to drive home the ridiculous stereotypes as the actors who wear them. This is especially true with the "Barbaras," who wear the most outrageously perfect ensembles.

Like most absurd comedies, Museum is not without its critical undercurrent. But the cool thing, from my vantage point, is that Howe raises more questions than she provides specific answers. Through the many laughs over the course of the performance, we come to understand that we're being asked to think critically about what we're observing and to question what it means both to create and partake of art.

Later this season, MMNT will produce a musical by Stephen Sondheim, himself a frequent analyst of the art-making process through his own works. As Sondheim has lyricized, "The art of making art is putting it together" – and that's what the MMNT artists, budding and experienced alike, have accomplished with Museum. 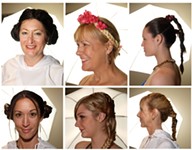 After a Fashion
Learn why Your Style Avatar is running around, flapping his arms, and shouting 'bingo!'