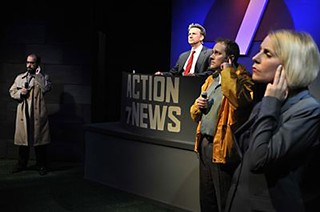 
Will Eno has been a big name at Hyde Park Theatre over the past year. From the playwright's Middletown, produced last September, to his Thom Pain (based on nothing) revived again in July and August, and now Tragedy: a tragedy, it would seem that HPT could've branded this "The Year of Eno." And that definitely would make sense. Eno's work fits with a wonderful peculiarity into the framework of intelligent, off-the-beaten-path plays that Artistic Director Ken Webster has established as the company's hallmark. Even if this past year's shows weren't offered up as an official EnoFest, they constitute one anyway: Outside of HPT's wildly popular FronteraFest, only one play in the season – Greg Pierce's Slowgirl – was by an author other than Eno.

It's that consistency of Webster & Co.'s dish that's led me to say, as I have before, that when I walk through the doors of the incredibly intimate performance venue on 43rd near Guadalupe, I'm usually pretty certain about what "kind" of theatre awaits. Thus, while I was completely unfamiliar with the play, I was pretty sure what sort of night was in store when I attended Tragedy: a tragedy on Friday evening. Turns out this Eno play sports an aptly loaded title, as it's a manifesto of sorts against the news media's tendency to milk a story for all it's worth, and then some ... and then some more. What if, Eno asks, the sun didn't rise one day? How might a news team react? The inevitable tailspin that ensues is classic Eno and classic HPT: intellectual, erudite art.

Webster pulls double duty as the production's director and dry news anchor Frank in the Studio, who's clearly going through his evening-after-evening motions but making some sobering discoveries about his position throughout the course of the proceedings. On the scene are Constance at the Home (Molly Karrasch); Michael the Legal Advisor (Michael Ferstenfeld); John in the Field (Benjamin Summers); the Witness (Nathan Brockett); and the Technician (Nahila Bonfiglio). The actors have clearly done their homework, and each member of this tight ensemble plays his or her role with distinct craft, leading us on an Enoian tour through the dictionary worthy of Derrida.

However, while Eno's intensive wordplay is fine (and often funny), 75 minutes can seem like quite a long time when the puzzle appears to be all about the way it's pieced together through language (though less indulgently so than Middletown). However, if you enjoy reflecting on the craft of a piece and those who bring it to life onstage, it's a fair bet that you won't be disappointed by this Tragedy.