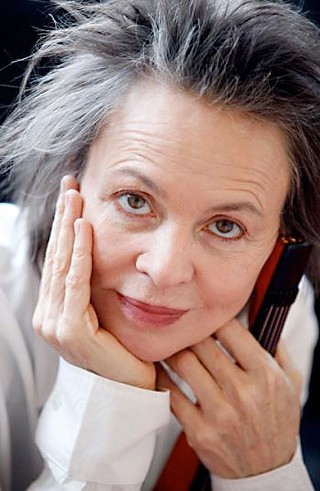 If it seems that Laurie Anderson's name has been popping up in Austin a lot lately, that's because it has. And it will for a few weeks more, as the pioneering composer, musician, performer, storyteller, and filmmaker is the C.L. and Henriette Cline Visiting Professor in the Humanities at the University of Texas this semester. The post, established by the Humanities Institute, has brought such eminent artists, writers, and scholars to campus as journalist Seymour Hersh, theatre director Richard Schechner, and local author Lawrence Wright. In bringing Anderson, the Institute has partnered with the Visual Arts Center and Texas Performing Arts – the former because studio art professor Margo Sawyer is a longtime friend of Anderson's, the latter because it co-commissioned a new musical work by Anderson and the Kronos Quartet to be performed in Bass Concert Hall in October.

For the professorship, Anderson is making three visits to Austin, with special events scheduled for each. The first, in early September, included a screening of Anderson's films and videos. She returns this week to open an exhibition of artwork related to the upcoming performance and to discuss collaboration with Rude Mechs playwright Kirk Lynn and composer/digital media whiz Bruce Pennycook. In her final visit in the third week of October, she and Kronos will perform Landfall, a work inspired by Hurricane Sandy, and she'll engage in an onstage dialogue with video artist Mike Smith. As she was assembling the "Landfall" exhibition in the Visual Arts Center, Anderson offered this thought on collaboration.

Austin Chronicle: You're set to discuss collaboration later. Has that always been a fixed concept for you, or has it evolved through the years?

Laurie Anderson: You know, that's never been a big concept for me because it's always been in the context of music. I haven't ever sat down with somebody and said, "What shall we make?" And in the sense that I've done music together with people, it's almost like we develop parallel things and end up together somehow, rather than giving and taking so much. Musically, it's often been in the sense of a producer, who obviously contributes a huge amount to the music. When I've done it with other musicians, it's almost a fight. So I can see why I don't do it more often.

Like with Peter Gabriel, we were working on a song together, and we were working on the bassline, and what he was doing was just driving me crazy. "That's not where the downbeat is!" You know, the bassline is key to the song – at least [the one] we were writing at that point. But I was listening to it, and I'd be, "That's insane!" So I was in another corner making my own bassline, and he heard that and went, "That's really crazy! That's not where it is." There was no room to meet in the middle. The other elements of the song – the percussion, the lyrics, the melodies – we were in agreement. But basslines ... And we just got louder and louder in our separate corners, like trying to drown the other person out with our bassline idea. I thought, "No good is going to come of this," so we each did our own song with our own bassline. Otherwise, it was a completely identical song. He did it on his record, and I did it on mine. It's crazy. Although I should have listened to Peter, because he has really good instincts in the low end. He hears so well there, and I don't think I do. He can make big caverns of deep sound with a lot of busy traffic going through it. He's a painter, he's a Goya down at the dark end of the music.