Penfold Theatre Company's latest production asks challenging questions about what success means to an individual. Rather than showing a great artist in his early days, Red features painter Mark Rothko (Steven Pounders) when he has achieved fame and a not-so-bad living. He's so stable that he can even afford to hire an assistant, Ken (Ryan Crowder), to help him manufacture the paintings commissioned by the famous New York restaurant the Four Seasons.

Young artists are cautioned to beware artistic success and fame, which may sound ridiculous to someone struggling in obscurity, but it's said often enough that there must be something to it. (Or so I imagine: I'm not writing from that side of the fence personally.) In Red, Rothko stands at a point of deep uncertainty. Can he maintain the level of insight and innovation that got him where he is? Will he continue to make great work, or is he doomed to produce mere imitations of his earlier paintings? How should he respond to emerging artists, like Andy Warhol, whose art is so radically different than his own? Ken acts as an opposing voice, someone with a new perspective and different ideas about what constitutes authenticity.

It's problematic that John Logan's script has Ken so very disappointed in Rothko for providing a painting to a restaurant, which he equates with selling out. It raises questions – ultimately unanswered – of what an artist can do for money. Is it okay to let private collectors purchase works for their homes but not allow an exclusive restaurant to feature fine art? Should art only be for the masses, in which case, is an artist not allowed to earn more than pennies for masterpieces? Maybe current trends in interior design and local food are getting in the way, but making a painting for a nice restaurant doesn't sound so bad.

Red's small cast and limited technical requirements make it a great fit for Penfold, and the company, whose work in recent years has been consistently strong, does a good job with it. Pounders is an able Grinch when faced with Ken's youthful optimism. Crowder gives Ken texture, making him someone who endures Rothko's lectures and middle-aged tantrums with equanimity but flinches when physical violence is threatened. Under Nathan Jerkins' direction, he makes smart, minimalist choices when telling his own sad story.

David Utley's relatively simple set design creates Rothko's studio in satisfying detail. The play's boldest action is to feature Rothko and Ken working an actual canvas with great swaths of red paint. One assumes water solubility, but it's still great fun to see actors throwing actual paint across a canvas and across the room.

Logan's script strives to be a heady, intellectual powerhouse of a literary work, yet it never quite achieves that level. Penfold's treatment, however, is solid, with good acting and design. Will it have the same impact as seeing a Rothko painting in person, in all its intensity of color? Not really, but sometimes it's okay to create art that is simply good.

Gay Place: DANDY DOODLE
Go forth and blow it up for the Fourth 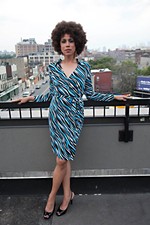