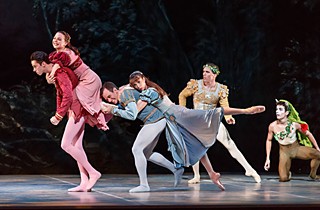 
It was as though the tangled quartet was one conglomerate body, the comic side of all love's conflicting intentions and realities represented by Helena, Demetrius, Hermia, and Lysander. Stephen Mills' choreography – performed by Jaime Lynn Witts, Christopher Swaim, Ashley Lynn Gilfix, and Frank Shott, respectively – was often astonishing: a dance saturated with intricate twists and turns whipped to peaks with slapstick and daredevil moves. And just when you thought the foursome was finished, here they came again, crossing the stage in domino-effect pursuit, the perplexed Hermia hugging Lysander's waist for dear life as he towed her across the floor.

While most of the Ballet Austin company can handle a joke well enough, Witts, the best actress and comedian, imparts the organism of the joke – its punch line and its context, its hilarity and its harsh reality – with her entire body, through the choreography, her natural facial expression being the cherry on top. In A Midsummer Night's Dream, the joke's on the mortals because of magic, and the ballet's fairy corps was helped in creating it by pretty sets and costumes courtesy of Ballet West, a sweet gaggle of children costumed as fanciful bugs, and the Mendelssohn score, in which regal order is underlaid with the 16th notes of busy fairy wings (played by musicians from Peter Bay's Austin Symphony, joined by an angelic chorus directed by Marc David Erck). As Puck, the quintessential magical mischief-maker, Jordan Moser drew an enthusiastic response from the audience, but I found him less charismatic and explosive than I had hoped. Aara Krumpe's luminous fairy queen Titania was paired with Paul Michael Bloodgood's foot-stamping-stubborn Oberon. As the mortal Hippolyta, Rebecca Johnson was coolly mysterious but marred by the unfortunate grappling and shuffling of Orlando Julius Canova, her nervous Theseus, in their duet.

Mills' Midsummer dates to 1999 and its more keenly distilled sections, like the comic quartet, precede his tighter Hamlet and Taming of the Shrew. After last year's performance of Shrew, I wondered whether that ballet – which, like Midsummer, was once performed in a single-act version at the Kennedy Center – had been overstretched to fill three acts. I was wrong. In Midsummer's two acts, the plot seems to cleave rather than gracefully arc; three are needed for trajectory. Midsummer's second half is a stand-alone "wedding act," which seems an unnecessary old-ballet relic given Mills' skill and invention. Here's hoping that he isn't tired of Midsummer after all these years and can find the time and funding to continue fine-tuning it.