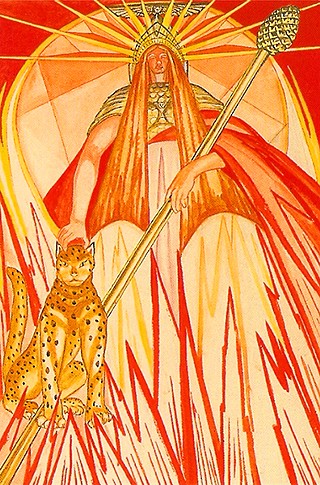 The Queen of Wands, from the Thoth tarot set


The tarot, as embodied in various decks of cards, has a long and interesting history. Annie La Ganga, as embodied in five-foot-something of faux-redheaded and seemingly invincible spitfire, has a long and interesting history. This past weekend, audiences in Salvage Vanguard Theater's smaller studio stage were treated to both of these things – courtesy of La Ganga herself.

Stepping solo into the spotlight in Austin for – could it be? – the first time since 2012's Drawing a Paycheck show, taking a break from her peripatetic performances with Rebecca Beegle as the Grownup Lady Story Company, and fresh off a residency at the Pacific Northwest's Portland Story Theater, the popular monologist enchanted a full-house crowd with tales of the odd origins of tarot decks, threading those histories with examples of her own personal connections with the cards. Candid tales of high school friendships and love gone wrong and waitressing and substance abuse and the problems of magical thinking were skillfully interwoven with reports on how the cards moved from game-playing markers to tools of occult divination in late 18th century Europe, how the various decks came to be illustrated (and by whom), and what the hell the great beast Aleister Crowley had to do with any of it.

This being a La Ganga show, of course there was engagement with the audience, with our host delightfully riffing stories off the cards that were chosen by random attendees, with a couple of visitors from a local chapter of the Ordo Templi Orientis gently correcting La Ganga's pronunciation of "Crowley." (Hint: The first syllable is pronounced like the name of that small black corvid, which flies so economically from one point to another.)

Driving home after the show, my wife and I reflected on what we'd just witnessed. "I wonder," said Katherine, "how much Annie plans these shows in advance. Because she always weaves everything together so well. Just the way she brings earlier asides back into the main story ... ."

Exactly. The woman is like one of the Major Arcana herself, and any opportunity to hear her share her own great secrets is an instance of good fortune indeed.