'Om Shanti – Once Upon a Time in Bollywood' 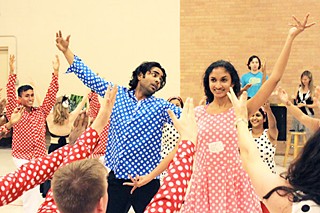 Indian live performance in Austin has, up to now, come largely from the classical realm – think of the Bharata Natyam danced by Anuradha Naimpally and Gina Lalli or the traditional music of the sitar, sarangi, and tabla presented by the Indian Classical Music Circle of Austin. This weekend, though, Indian pop culture bursts onto the scene with what promises to be a spectacle on par with a Bollywood film. Indeed, it's precisely that staple of Indian cinema from which this large-scale production – 80 dancers, 20 actors, a $140,000 budget – takes its inspiration. Om Shanti – Once Upon a Time in Bollywood attempts to re-create live on the Dell Hall stage the kind of opulent musical numbers seen previously only on the silver screen.

This ambitious project springs from the mind of Prakash Mohandas, a local quintuple threat – actor/dancer/musician/filmmaker/electrical engineer – whose company, Agni Entertainment, has already mounted a similarly expansive theatrical project: Lanka, an original play that blends storytelling, dance, and martial arts to relate a drama rooted in the great Hindu epic, the Ramayana. That 2011 effort was about half the size of the current show, but Mohandas managed not only to present it in Austin but also to tour it to San Antonio, Houston, and Dallas. The notion for the new production came to him when he was watching a musical number in the Bollywood movie Om Shanti Om and felt it was possible to re-create that spectacle onstage. Since no one else was attempting it – or hadn't since the Andrew Lloyd Webber-produced Bombay Dreams of a decade past – he might as well. "It was the mere lack of the existence of such a project that drove its creation," Mohandas says. "Bollywood being all about music and dance, it was only a matter of time before someone adapted it for stage."

Mohandas cites such Bollywood hits as Om Shanti Om, Mr. India, and Sholay as sources for the characters, songs, and story in Om Shanti – Once Upon a Time in Bollywood, which follows the fairy-tale romance between a court dancer, Om, and Shanti, a princess in a land called Bollywood. But in addition to the signature Bollywood production numbers, Mohandas has spiced the project with several other "flavors" of dance – tango, jazz, disco, bellydance, Persian dance – a decision driven partly by the talent pool from which he had to draw. He wasn't sure that Austin had all the skilled dancers, actors, and musicians he'd need to mount such a massive musical. "From the beginning, I knew that this had to be a collaboration for it to work," he says. "So to begin with, there was a parallel effort to audition folks independently as well as contact groups of dancers that fit into the template." The Sabaya Bellydance Collective, the Austin City Showgirls, and the University of Texas student Bollywood-Fusion dance team Nach Baliye are among the diverse troupes that have signed on as collaborators on the show.

Mohandas also recruited Kalalaya Productions founder Krishna Sankar to co-direct, Divya Dinakar to choreograph, Katja Lindner and Srikanth Balaji to supervise the music, Aparna Nayani to supply costumes, and Austin Critics Table Award-winning designers Jason Amato and Ia Ensterä to provide lighting and sets, respectively. It's an impressive team, and although Om Shanti – Once Upon a Time in Bollywood has consumed his life for the past five months – Mohandas estimates giving up more than 400 hours of his time to the project already – he's thrilled to be "working with such an immense amount of talent all at one shot. The diversity in the musical is just fantastic, and it reassures the fact that anything is possible, even in a relatively small city like Austin. Having a vision for something and watching a team of people make it happen is always very gratifying."