What do you get the god who is everything? A god who bulges because he must carry lists of everything in the world; a kind of uber-mid-century man at the top of his game, annoyed by his wife, regretting lost love, finding that new cup-bearing boy Ganymede disturbingly cute?

You get him a shrink, apparently. Or at least, this was the Zeus in Therapy conceived by Douglass Stott Parker, the late and greatly missed University of Texas professor. "Imagine Kurt Vonnegut teaching classics," says the UT Faculty Council's surprisingly warm and un-stodgy memorial, "and you will have some idea of who Douglass Parker was and what he meant for over 40 years to the [UT] community of scholars and students."

Periodically over 14 years, Parker would post on his office door a new installment in his bebop/Beat poem cycle, Zeus in Therapy. Handwritten on yellow legal pads, the poems delighted colleagues and students.

Parker's translation of Lysistrata, Aristophanes' sexy anti-war comedy (an aside: we need more of those) was read aloud at Sixties sit-ins, has been produced more than 200 times, and stands as the current Signet Classics edition. His translation of Aristophanes' The Congresswoman made him a National Book Award finalist.

But, according to the UT memorial, Parker also offered Plan II seminars on subjects as varied as "pastoralism, serendipity, improvisation, fragments, creativity, and the way the world ends." He taught a yearly course on imaginary landscapes that drew the attention of The New York Times.

Oh, right: He was also an improvisatory jazz trombonist.

And once, in his 40s, while performing in Antony and Cleopatra outdoors on campus, he carried on despite a serious heart attack, reasoning that "I die in Act IV anyway, I might as well make it on through." 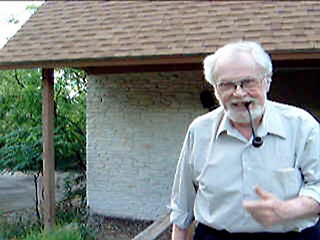 Parker near the end of his life (Courtesy of Stott Parker)

And in his 80s, when his wife was in a nursing home, unable to speak, "he would go every day and read her Raggedy Ann stories, because she remembered those from childhood," says Tutto producer Matthew Ervin, who came to know Parker when he worked in the Classics Department.

We all know de mortuis nihil nisi bonum (see what I did there? classics professor!), but the posthumous praise for Douglas Stott Parker is off the charts.

James Loehlin, UT English professor and director of Shakespeare at Winedale, calls him "an absolutely wonderful man, wise and charming and witty and self-deprecating," as well as "a brilliant wit and an excellent dramatic craftsman. "

Colleagues in the issue of the Didaskalia journal memorializing Parker called him "a delight – creative, flexible, generous, funny"; "absolutely the best translator of ancient comedy into English in the 20th century"; "terribly funny – at least once, he had me literally rolling on the floor with helpless, painful laughter – as well, of course, as terribly serious."

Ervin and Tutto Artistic Director Gary Jaffe say that the Zeus in Therapy cast has been struck by the reactions they get when they mention the play – how often people recognize it as Parker's poetry, and how warmly he is remembered.

That seems to be the consensus.

Parker wrote the first of his 52 Zeus in Therapy poems in 1979, the last around 1993. He meant them to be spoken aloud. "I did it at Liberty Lunch," he said in a 1982 Didaskalia interview, "and I do it occasionally when I can get two English speakers trapped in a corner."

Parker never formally ended the cycle, only stopped writing the poems. So how did Tutto turn them into a play? Ervin and Jaffe met weekly, reading a few poems aloud at each session until, as Jaffe says, "we narrowed it down to the 36 we thought were most theatrically adaptable."

But before shaping the poems into a script, they assembled a cast of 11 men and women, ethnically diverse and ranging in age from 17 to 63 – none of them, incidentally, your typical Zeusian old white guy. Parker in his most Zeus-like days (Courtesy of Stott Parker)

The silent therapist grounds the play, says Jaffe, while the other 10 make up a "core ensemble of actors that [can] quickly and efficiently create a myth ... that sort of explosive, creative world." Eight of them also play Zeus, and they don't always take turns. "It's like all eight are in Zeus' brain at one time," Jaffe explains, "because Zeus is everything, right, and everyone? So there are scenes that'll have one Zeus, and there are scenes that'll have all eight of them. And sometimes they're counteracting each other, and sometimes they're all on the same page. And it creates a sense of Zeus as a multitudinous personality."

Casting the play first and finding that they had two young actors suited to playing classic lovers helped Ervin and Jaffe see "there was a narrative in [Parker's poems] already, especially regarding Semele."

If you've forgotten (I had), Semele is one of Zeus' numerous, usually doomed paramours. Semele's fate was especially sad. As Jaffe tells it, she "asks Zeus to reveal himself entirely – or in our play, it's 'Be yourself.' And that incinerates her, because as a mortal she can't behold the god. So a lot of this 'Why is Zeus in therapy?' comes down to his destroying this young woman he loved, by being himself."

But if that makes the play sound somber, I've misled you. In the brief, funny excerpts I've read, Zeus in Therapy shows a profoundly self-aware and self-ironizing contemporary man grappling with life, lust, and a complicated, many-faceted psyche.

So perhaps it's not surprising that the accolades for Parker all reflect polarities: a wit and a craftsman; funny and serious; enthusiasm and rigor. Like Zeus, Parker contained multitudes, and like Zeus, he was, for a while at least, rather large.

"I was a fat, bright kid," he said in the Didaskalia interview. Weight is explored in Zeus in Therapy, when in response to complaints from his wife, the god says, "I know I bulge/when I walk abroad/but thats all part/of being god." "The reason he bulges," explains Jaffe, "is that he has to keep on his person at all times all the lists which have all the things in the world on them. And if he loses one of the lists, it's gone."

What a beautiful explanation for extra weight: that you're protecting the whole world by carrying it upon you.

The poster for Zeus in Therapy shows the god's face surrounded by a tangled, swirling thunderstorm of beard and hair. On closer inspection, the swirls are actually the things of Zeus' world: leaves, vines, a swan, a bull – all the items on his bulging lists.

"I've said from the beginning that it's more about therapy than it is about Zeus," Jaffe concludes. "It's more about taking modern human problems and exploding them to Zeus-al proportions. But it's still about 'How do I "be myself"? How do I fulfill others' and my own expectations of myself, when I have a thousand names, and I am everything? When my wife bugs me? When I'm oddly attracted to that young boy bearing cups?'"

About translation, Parker once quoted Thelonious Monk: "The cats I like are the cats who take chances." He likely would have approved Tutto's bold approach to giving his poems expression once again – even if we no longer have Liberty Lunch, or Douglass Parker's own warm and living voice.