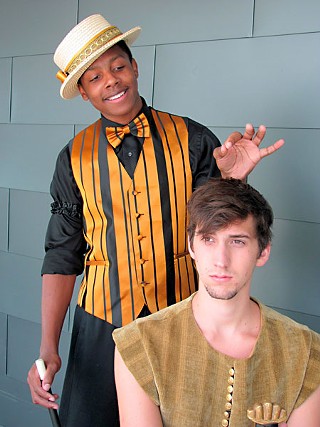 We've got magic to do: The Leading Player (Vincent Hooper) wants Pippin (Gray Randolph) to join him. (Courtesy of Teresa Carson)


Pippin is a surprisingly long-lived and flexible show. From its inception in the early Seventies – a production financed, in part, by Motown Records, which led to covers of a handful of its songs by artists including Michael Jackson and the Supremes – through its countless high school productions to the recent Broadway revival (which cleaned up at this year's Tony Awards), Pippin has always punched above its weight. While it doesn't have a reputation as a masterpiece, it has a durability befitting a piece that is, ultimately, about finding your own corner of the sky. You can take Pippin to Broadway, to Motown, or to a school auditorium – the thing still tends to work.

That's certainly true of Summer Stock Austin's production, which again finds a broad assortment of the city's youthful talent – the program lists 31 high school- and college-aged performers in its cast – taking the stage together. The show opens with the stage packed with people in charismatic costumes, exhorting the audience to "join us," and it's an effective come-on: So much of what makes Pippin work is the notion that the world of lights and songs and magic we see onstage is dazzling, and director Ginger Morris and co-musical directors Michael McKelvey and Adam Roberts – full disclosure: a Chronicle arts writer – do a fine job of setting up that illusion.

The show itself follows Pippin – the eldest son of Charlemagne (Alec Cudmore) and played here by Gray Randolph as a hoodie-wearing everykid – as he returns from his studies on a quest to find a life that's bold and fulfilling enough for his own opinion of himself. He pursues the arts of war, the pleasures of the flesh, the craft of politics, and the simple joys of a quiet home life before deciding that none of them really provide the exciting life he feels he deserves. Along the way, he's taunted by a nameless Leading Player (Vincent Hooper), who encourages him to dream those big dreams, with the suggestion that there's a grand, glorious finale available to him if he's unable to find it in any of the choices he makes.

Most of this is set up by the show as parts on which to hang a lot of fun set pieces, and the Summer Stock production embraces that. There are battle scenes, sex choreography, love songs, and a sense of surreal silliness that runs throughout the performance. The sprawling cast helps pull those things off, too, whether it's the soldiers engaged in slow-motion combat or the cleverly costumed ensemble (there's no circus here as in the Broadway revival, but there are a strongman and a bearded lady) drawing attention to the way that life on a stage is just so much more exciting than life in the seats. Pippin takes full advantage of Summer Stock's resources, and forty years into its life, Pippin still works.