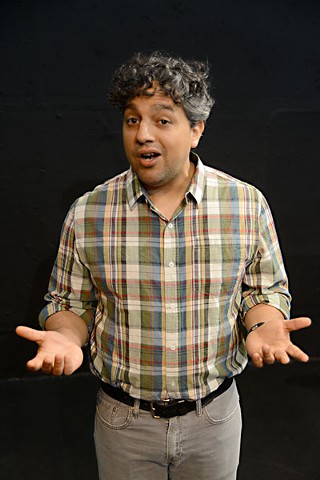 A journey into the interior – of Mexico and himself: Mical Trejo in Confessions of a Mexpatriate (Photo courtesy of Alberto Jiminez)

Raul Garza has given audiences fantastical tours of Austin and a Texas border town in his plays Fantasmaville and Cura, and even led them on an excursion into "Texaco," a futuristic no-man's-land carved out of what we know as the southern part of our state, in Dos Pocitos. Now, the award-winning playwright has arranged a trip across the border and deep into the Mexican Interior. Confessions of a Mexpatriate follows a modern-day, media-minded Mexican-American who wants to unplug from his American side and connect with his Mexican roots in the land of his ancestors. His account of what happens is both funny and fearful – and may say as much about the land he left behind as the one he has entered. Teatro Vivo, which has done so much to promote Garza's work, is producing the premiere of this new play, with Mical Trejo delivering the story and, in a rare foray outside of Hyde Park Theatre, Ken Webster directing. Here, the playwright shares some background on his latest dramatic expedition.

Austin Chronicle: I have this impression of your work moving southward, from Austin in Fantasmaville to the border in Cura and Dos Pocitos and now into Mexico for Confessions of a Mexpatriate. Has that been a conscious direction for you?

Raul Garza: Interesting observation – maybe you've identified a subconscious direction. Earlier plays definitely allude to Mexico and even cross the border occasionally. In Confessions of a Mexpatriate, however, the story and the storytelling move back and forth between corporate America and Interior Mexico. There is less of the cultural gray area of the border than in my earlier works and a much deeper exploration of the distinct Mexican and American halves of the Mexican-American identity.

AC: Is the passage across Mexico in the play rooted in any experience that you or someone you know has had? What sparked this journey?

RG: I have always loved travel in Mexico and have always felt that duality of biculturalism – oozing American pop culture while feeling pangs of longing for the richness of Mexicanismo. Confessions of a Mexpatriate sprung to life during a four-week writing residency I completed last fall in Oaxaca. I was dutifully working on another play, and inhaling Mexican food and culture, when Confessions of a Mexpatriate showed up unannounced, and demanded to be written – wrote itself, really.

The play addresses the concept of "Mexpatriatism" – abandoning the U.S. for a better, more authentic life across the border. Obviously, Mexico is a big part of that story, but not the only part. As a writer, it was tempting to focus on the exotic, romantic, or even dangerous elements of Mexico. But I set out to create a reflective narrative rather than a personal travel journal or glorified Facebook log and hope this work accomplishes that.

AC: You've chosen the monologue format to tell this story. Is there a reason you wanted to distill this into essentially a story rather than a multicharacter drama?

RG: Call me self-indulgent, but I love few things more than a great monologue. I am drawn to the boldness and intimacy of the format and enjoy the challenge of creating a work that relies so heavily on language. In the case of Mexpatriate, I (finally) had what I considered the ideal scenario to tell a story from a single perspective: a personal crisis that involves the protagonist's shifting realities as virtual characters. The writing came out leaner, springier, and just truer from a single voice.

AC: Do you see the cultural shifts north of the border being mirrored south of it?

RG: American cultural shifts are apparent throughout Mexico thanks to all-powerful social media. I found that Mexicans feel very connected to the United States, but at the same time enjoy their autonomy. Here in the States, there is this notion that every Mexican is just dying to figure out how to get over here. That could not be further from the truth. The Mexicans I visited with had a profound love of country and wouldn't trade their culture for anything.

The flip side of that is that Americans, and I'd say particularly Mexican-Americans traveling to Mexico, struggle to accept or "own" our uniquely American cultural imprint. And that's where real self-discovery begins. Maybe.