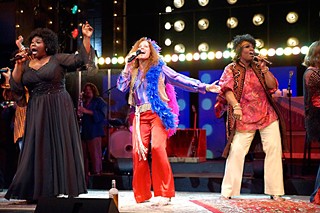 
As Zach concludes its first season in the now-familiar Topfer Theatre, I wish they'd made the seats in there removable. Never before at a theatrical event have I so wanted to stand up and dance as I did during One Night With Janis Joplin. The performers and designers nail the show's conceit as a rock &amp; roll concert – one night with the enigmatic queen of rock herself – but instead of rocking out, passing around joints, and taking swigs from Lone Star bottles, audience members are mostly confined to their seats, sipping beer from straws out of plastic cups with lids.

It felt stuffy to me to sit and watch as Kacee Clanton put far more than just a little piece of her heart into a powerful performance of Janis that left everyone in the audience grinning and grooving. I wanted to get up and jam with her, man! After playing Janis on-and-off for more than 10 years, Clanton has mastered the singer's salty and sweet demeanor, not to mention that epochal wail. And with more than 20 musical numbers in the show, including all of the greatest hits, Clanton oozes Janis' loneliness, pain, and passion over and over again. "Music is everything," she says during one interlude. "It turns on that switch in your brain: Maybe I can do anything."

One Night With Janis Joplin is more a hymn to Joplin's musical influences than it is the story of her troubled and freewheeling life. In addition to a shredding backup band and an energetic trio of "Joplinaires" (Felicia Dinwiddie, Tricky Jones, and Janis understudy Cari Hutson), playwright/director Randy Johnson throws a blues singer (Tiffany Mann) into the mix to embody Janis' idols. Mann's versatile voice shatters and soothes, booms and floats, haunts and enlivens. She is, in a word, outstanding. From Nina Simone to Etta James and Aretha Franklin, Mann (aided by Susan Branch Towne's glamorous costumes) embodies the sorrow and joy of the blues world that so enchanted Janis Joplin.

As Janis grieves for Bessie Smith's untimely death, we see one of just two allusions in the show to Janis' infamous departure from this life: "People, whether they know it or not, like their blues singers miserable. They like their blues singers to die." But that darkness is relegated to the corners of One Night With Janis Joplin; the show remembers Janis as she lived, not as she died. By focusing on her music, Johnson further remembers only select pieces of Janis' life; the less palatable things, like her substance abuse and promiscuity, are somewhat obscured. Nonetheless, One Night With Janis Joplin is a beautiful, soulful portrait of the artist, and Zach's exhilarating production will leave you wishing you could have danced all night.

Holier Than Thou
Poison Apple Initiative's show draws reality TV and religion together in a thoughtful, thought-provoking way