The Line That Divides Us 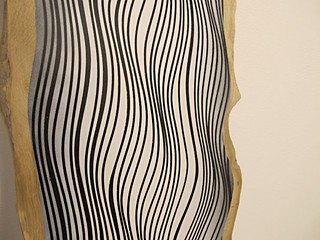 'The Line That Divides Us'


I don't know that Jason Middlebrook's collection at Lora Reynolds Gallery implores a dialogue on human-nature symbiosis, even the nuanced one the show's literature suggests. But I do think "The Line That Divides Us" demonstrates the artist's fascination with nature as it relates to design.

The seven pieces in the gallery's Project Room are similar to those in a collection at Mass MoCA, titled "My Landscape": abstract lines and shapes done with acrylic and spray paint over vertical slabs of maple, walnut, elm, cottonwood, ash, and birch. Importantly, the slabs are still trees to some degree. Lines formed by the artist's hand intersect with the natural lines drawn by the tree's growth rings, occasionally alluding to architectural design. Respecting the Grain and Northern Territory contain patterns that represent the horizontal cross section of a tree, literally pulling the design for a city out of nature.

The pieces I find fascinating are those that, from almost any angle, appear warped and rippled. This illusion of depth, created by varying the distance between long, wavy vertical lines, in Black Betty and Follow the Curves have me questioning the premise to my initial evaluation. On first look, I felt that the work tried too hard for a sentimental environmental message, and then I was angry that it didn't have a strong, specific message about ... deforestation, perhaps. But the work compels me to look deeper, not out of my need to make sense of things, to make order, but out of my fascination with the abstraction of a tree. What is a tree? I wonder, which is another way of saying that I detect some metaphysical content in this devoutly abstract, formalist-inspired material.

Middlebrook's patterns and lines are inspired by the hand of nature as much as they interrupt it. We, humans, are in the grain of the tree, in the complexity of quickly developing and adapting cells that form life. We are the pattern in the chaos. But we are not in the wood, because we have that tendency to rearrange the configurations if for no other reason than to let the universe know we are here. The nuance of the work is its ability to remain ambivalent to that tendency while observing it deeply.

The artist probably didn't have this construct in mind. The show's literature alludes to opportunities for "communion and mutualistic symbiosis with the natural world," apparently unaware that for Middlebrook to do his work, trees have to die. But, as I've written before, the artist's thoughts on his work don't matter all that much. To paraphrase Blanchot, for the artist, his work is a secret. So the line that divides us might very well be the difference between intention and interpretation.