Contemporary Photographic Practice and the Archive 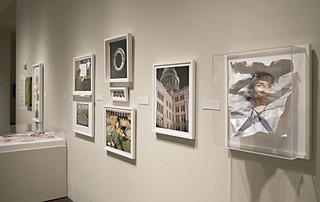 'Contemporary Photographic Practice and the Archive'


"Contemporary Photographic Practice and the Archive" forms a narrative about photographic art history and process, but, curiously, it was curated by the 11 artists whose work appears in the show with the implicit goal of demonstrating the relevance of the exhibition space and its archive. The Austin-based Lakes Were Rivers photographic collective stocked the exhibit with "a body of work influenced in some way by the Harry Ransom Center – its space, its purpose, its collections." One word for this kind of material is "site-specific." Another is "marketing." The difference is in the outcome.

The work on display at the Ransom Center is an accomplished excuse to display a section of the institution's archives, simultaneously revealing evolutions in photographic methodology and demonstrating the lasting discoveries of early photographic work. This is evident from the first series of photographs that explains where Lakes Were Rivers acquired its name, but also reminds us of a fundamental accomplishment of photography: objective documentation of history. The series pairs scenes of Texas rivers with later images after the rivers had been dammed, forming lakes.

The exhibition contains obvious form and content connections as well as less decipherable intersections of the archive and works by Lakes Were Rivers. For instance, Jason Reed's new photos of the border region hang alongside similar works by W.D. Smithers from the 1930s. And Adam Schreiber's Terrain Vague is a direct response to Giovanni Domencio Cassini's Map of the Moon from 1679. More complicatedly, Susan Scafati Shahan's Strings + Lines – which arranges frames containing violin pegs and strings with a print of the artist playing a violin against the backdrop of a tank – appears to interpret Daphnis et Chloé, a manuscript score signed by Maurice Ravel.

Barry Stone, coming from the point of view that photography "blurs the line ... between art and science," sets up his collection of digitally altered photographs with a broadside print of a bunch of grapes by an anonymous artist that form into a beard. He simultaneously argues that "seeing isn't believing" can't always be believed, and that there are objects and phenomena playing out around us that we can't see. The latter is demonstrated by Hubert Schardin's photo of a bullet passing through a flame, revealing the soundwaves. Stone's black-and-white landscape photos likewise reveal the unseen code behind a digital print by manipulating it to create wide distortions of the images.