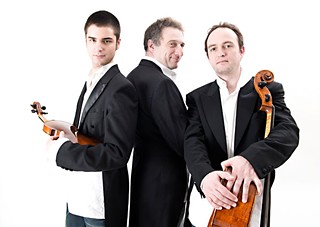 The relationship among players is the cornerstone of chamber music. With no conductor to lead the way through the composition, as with an orchestra, the musicians must work together to set a piece's tempo and tone, to shape a cohesive interpretation. If the people playing aren't connected, the music won't hang together.

So then, how does a professional chamber ensemble – whose success is so dependent on a finely honed level of groupthink and sensitivity of the members for one another – go about replacing a longtime member? Three groups performing at this year's Austin Chamber Music Festival, which begins Friday and runs three weeks, have faced that challenge recently. The Eroica Trio, Vienna Piano Trio, and Miró Quartet have all had to replace members – all violinists, coincidentally – in the last three years, says Austin Chamber Music Center Artistic Director Michelle Schumann, who programs the festival. She's been asking musicians from these groups about changing personnel and how it shifts the dynamic in an ensemble, and she shared some insights with the Chronicle.

Austin Chronicle: I once interviewed members of the Miró Quartet about how they teach intimacy and cohesion to young musicians in a chamber group. If that's part of how you work day in and day out, then introducing a new person into that mix means you can't just automatically do what you've always done, because it might not mesh with what the new person's doing.

Michelle Schumann: You said, "How do you teach that to a group?" How do you teach that to a couple? You don't, right? There's this serendipitous chemistry. We always talk about chemistry in relationships and friendships, and it's the same thing in chamber music. It has to be that, and it's all the more complicated because you have [more people] – well, sometimes it's a duo, but if it's a quartet, holy moly, that's a lot of people that have to jibe.

I asked the pianist for the Vienna Trio about their search for a violinist, and he said something very interesting: He and the cellist decided that the first round of their interview process was not going to be playing but was going to be having a beer together. And there were a couple of people that they got together with in the beer round, and they just knew it wasn't going to work. Because you travel together. You live a lot of life together. Now, there were many famous quartets who did not get along at all, so I don't know if it's a fallacy to say that if you don't get along on a personal level, you can't get along on a musical level. But in my life, I don't have fun playing with people I don't like. It's not great music-making, because if you don't like someone, then you can't trust that person. And the whole idea of collaborative art is to trust, that if you're going to do something, that person will respond to what you're doing, and it's going to reflect the rule of improvisation: You have to say, "Yes, and ..." It's the exact same thing in this art form. So that chemistry is everything.

AC: When you're onstage with someone, you want to know that that person is going to be as open to you and what you create as you are to them. If you get a sense that the other person is going to try and drive the bus, it's not worth your while.

MS: That's how you'd be in a personal relationship with someone. It's irritating if you're having a conversation with someone, and that person is always talking and never listens, right? All of these artists who come for the festival, who are chamber music artists, find their way through that desire to collaborate, that desire to share art, and also the realization that, no matter how brilliant you are as an individual and how brilliant your ideas might be, there's an opportunity to augment that if you have other people's thoughts and ideas. You can say about a quartet that it's four times the creativity of any individual person. Daniel Ching of the Miró: He's four times a better player than he would be on his own. And I know for me, when you rehearse with people, having access to different ideas that you'd never have thought of before or [sharing with them] ideas that they had never thought of before, it's an exciting thing.

There's no [chamber group] that doesn't get together first and foremost because they like each other. So many of these trios, quartets, quintets, what have you, were founded when [the musicians] were in undergraduate and graduate school. And it didn't just happen because they were the four best players in the school. These were people who hung out together after orchestra or whatever and decided to do this.

The [members of the] group Time for Three are all Curtis grads – the Curtis Institute of Music in Philadelphia is the most elite music school in the country and has been for a long, long time; it is so unbelievably exclusive, and these three guys all went to Curtis, and they would hang out after orchestra and would jam together. And it was totally separate from what they were studying. They would do popular music and arrangements for two violins and bass, which is totally unheard of, and they would play at parties. And the teachers started to take note that what they were doing was on such a high level that it didn't matter that it wasn't Bach or Beethoven. They were actually encouraged by the president of Curtis [at the time], Gary Graffman, this real stalwart of a figure, a pianist and one of the greats. Then they started combining classical music with regular music, so they'd do the Bach double concerto for two violins and then work it into something else. They have this piece where they've interspersed Stravinsky's Firebird Suite with Katy Perry's "Firework." So they're bringing together these things, and in that way they bring together different audiences. It's a complete mash-up of styles and techniques and music. When they first started playing together, they weren't thinking about how this was going to fit in their careers at all; they were just jamming together.

I think the majority of these troupes were just playing music and having fun together when they were founded. The Miró Quartet came out of Oberlin. The Eroica Trio – both the cellist and the pianist had known [the group's new] violinist since they were 12 years old. They had been playing music together, they went to the same camp, and she would have been the original violinist of the Eroica Trio had she not gone on to something else. And all that comes from a feeling of that connection.