Nobody much likes getting the third degree. But I have to say, when the figure badgering you with questions is a dwarfish detective who pronounces every "r" as a "w" and the light under which you're being interrogated rises up out of the back of his trenchcoat, it's pretty fun.

Butt Kapinski is the moniker of this preposterous private dick, pretty much what you'd get if Raymond Chandler had written Philip Marlowe as Elmer Fudd. This writer had the privilege of being grilled by this goofy gumshoe – along with several other audience members – when Kapinski's creator, Los Angeles writer/performer Deanna Fleysher, brought the character to Austin for a January run at the Institution Theater. In each show, Fleysher improvises a mystery in which every audience member is involved in some way – as victim, as suspect, as witness, as ... cat. Rarely have I seen an entire audience surrender its anxiety over participation in a show and gleefully give themselves over to the play of storytelling as with Butt Kapinski. Fleysher is so comically engaging in the role that everyone gleefully followed her down the wabbit hole onto the mean stweets of a hilariously seedy, knuckleheaded noir city of trampy hookers, cat-obsessed slumlords, and cowwupt cops.

To our delight, Fleysher is back in town for two nights. Fans of noir fiction, good comedy, and great improv, tweat yourselves to the pweasure of meeting Butt Kapinski under the streetlamp permanently affixed to his back. 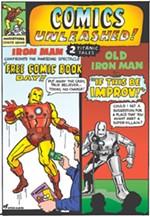