Austin Playhouse's take on this chamber musical features a wealth of talent, but the staging is static 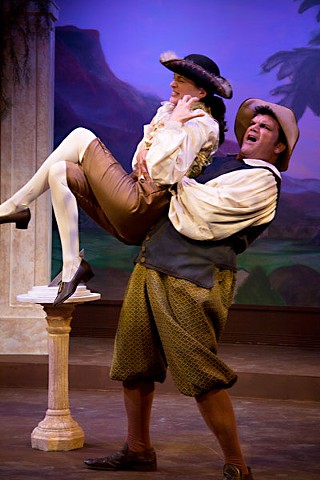 
By now, Austin Playhouse patrons are plenty familiar with the company's temporary home, a smartly renovated storefront in Highland Mall. The premises provide for just a small stage, but in the case of the current production, the grandeur of the title veritably sweeps across the boards in Patrick and Holly Crowley's set. The triumph here is the melding of a whimsical artistic vision, keen craftsmanship, and the ingenuity to create an epic visual in such tight quarters. But despite much obvious talent both offstage and on, an evening laden with stagnant staging feels out of step with its intricate set.

The farcical, quasi-period-piece musical (think A Funny Thing Happened on the Way to the Forum sans the belly laughs) uses the ages-old device of gender-bending disguise to allow its protagonist to befuddle many a character and win her leading man. "Although ostensibly set in ancient Greece," the playbill notes, "the design for the musical is decidedly more baroque than Spartan." This is fitting, given that Triumph of Love is adapted from a Pierre de Marivaux play of 1732. But the score boasts a pastiche-esque quality, making reference to various musical styles hailing from far more contemporary times than the baroque. It's an odd (though not unprecedented) juxtaposition of score and story, setting and aesthetic; yet what could easily become a hodgepodge of references seems to work in the Playhouse's version; there's enough through-line here to unify the evening and enough information to help make sense of the goings-on.

The problem is staging so static that it failed to hold my interest, especially in the already duller moments of the show as written. For me, the production relies on too much "park and bark," as it's called in musical theatre circles: planting one's feet for the duration of a song and letting 'er rip. As a result, this Triumph of Love feels more like a concert staging than the fully staged production one expects. This is not aided by the lighting, which remains, for all intents and purposes, at a full-stage wash for the vast majority of the show. And though Glenda Barnes' costumes are as gorgeous and intriguing as the set, you feel as though you're looking at a painting for most of the show, with the occasional moving figure venturing into the frame.

This isn't to say that the production is completely bereft of physicality. Choreographer Lisa Del Rosario colors the lighthearted numbers with simple, fun splashes of movement, and actor Brian Coughlin demonstrates his usual flair for comedic physicality, a craft that he understands and executes brilliantly. If you're a chamber musical fanatic, you might want to catch Triumph of Love – it isn't mounted as often as some, and there's a wealth of talent onstage. But be prepared for an evening that may idle too often.