Where would the theatre be without booze? I don't mean offstage, though Thespis knows how much show folk love their libations. (To see where the locals hoist a few when they're not at the theatre, visit austinchronicle.com/blogs.) I'm talking about the plays and all those prodigious characters fueled – and ruined – by alcohol. Can you imagine a dramatic canon without Falstaff and Sir Toby Belch? The pipe-dreaming sots of Harry Hope's bar? George and Martha? And they're just the tip of the ice cube in theatre's huge highball of imbibers. For centuries, playwrights have employed alcohol to liberate inhibitions, to free long-repressed feelings and secrets – it's a liquid shortcut to the truth. Leave out the liquor, and the Tyrone family revelations would take an even Longer Day's Journey Into Night. So the curtain rises, and people drink. And drink. And drink.

How actors convincingly portray such sauce swillers is a major challenge, as anyone who's tried to play plastered can attest. One strategy is rehearsing the play with actors downing actual hooch when the characters do. "I've always found drunk rehearsals to be very effective, as an actor and a director," says David Jones. "During rehearsals for Long Day's Journey, the cast was having trouble plumbing the depths of the show. One night, a huge bottle of Bushmills appeared on the rehearsal set. By the end of the evening, the bottle was empty, and we had definitely plumbed the depths. But it's a tool that should be used judiciously – only after the actors know their lines and only once per show."

Of course, not everyone's experience is positive. Mike Sullivan recalls a rehearsal for Who's Afraid of Virginia Woolf in which "we tried to drink as much as George and Martha do. Disaster. We never made it through the rehearsal, and the experience did nothing to help us as actors." 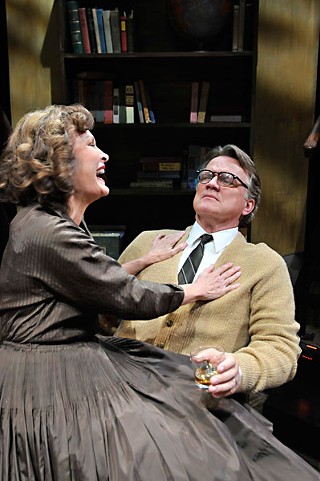 Just a hint of the hard stuff: Babs George and Ev Lunning in Who's Afraid of Virginia Woolf? (Photo courtesy of Bret Brookshire)

Babs George, who played Martha in 2010, didn't slip into the character's sozzled shoes by guzzling gin. But that doesn't mean she totally abstained. "I doggedly believe that if you have just a hint of the real stuff in the bottles," she says, "just the smell and flavor will take you to the next level of acting inebriated, or however the liquor is supposed to end up affecting you. Now, the question is, what constitutes a 'hint'?"

Jones took a similar tack playing Jamie Tyrone in Long Day's Journey. "I kept a half pint of whiskey on hand. Before the show, I'd take a generous swig and then wet a handkerchief with the whiskey and put it in my coat pocket. Aromatherapy for both me and the audience."

With some shows, a little bracer in performance has less to do with finding characters than with bonding the ensemble. "Breaking String's production of The Seagull broke a lot of ground in the consumption of alcohol before, during, and after performances," recalls George. "We wanted to feel like real Russians, so we spoke all our names with Russian accents, toasted in Russian, and knocked back shots of vodka."

Imbibing before or during shows, however, isn't without its consequences. Lowell Bartholomee remembers an actor showing up for a performance of Macbeth "with that impressive booze-sweat smell, the kind that stings your nostrils from a yard away." Alas, he was supposed to murder Bartholomee's Banquo during a carefully choreographed fight with iron broadswords. "That night I drew my sword, prepped to swing, and suddenly felt the blade end of his sword slam across the crown of my skull. My knees buckled, I stumbled away, the fight continued, and I died. Later that night, I get a call from the choreographer sounding like Michael Corleone: 'Does something need to be done about this?' I may have saved his life by saying it was fine. I don't think he did theatre again after that." Once in Long Day's Journey, the actor playing Jones' brother had a few pre-show margaritas, and as the two warmed up for their fight scene, "his stage punch turned into a full roundhouse right," says Jones. "I saw stars and could barely move my jaw. Needless to say, I had more than one swig of whiskey that night."

That may help explain Jones' attitude that drinking, however useful to a performance, shouldn't be done indiscriminately: "I was watching opening night of a show I directed and could smell the alcohol wafting from the stage. The actors got a stern talking to. Acting like you're drunk is a craft. Getting drunk is just plain lazy."

For additional tales of alcohol consumption in the theatre – the good, the bad, and the ugly – visit. austinchronicle.com/blogs

Who Says You're Drunk?
Bars and bartenders may help you tie one on – but they're also expected to cut you off just this side of 'intoxication'