In a changing city, Michael Anthony García embraces the changing role of the visual artmaker 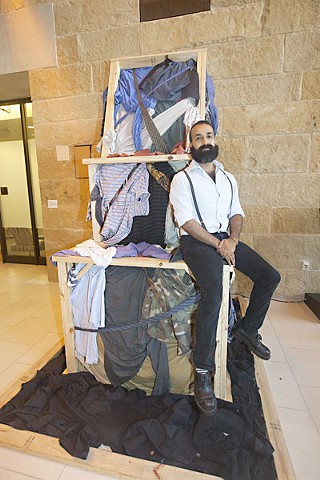 Austin in 2001 would barely recognize the Austin we know today. In many ways, it feels that what used to be considered absolute has shifted and definitions have been reworked. The Capitol building used to be a tall, reflective monument to the city's history and success. Now it is dwarfed by the newly developed Downtown skyscrapers. Once upon a time, homegrown music ruled the city. Now, ACL and SXSW have shifted the focus to sounds from around the world. Traditionally, Austin offered artists a respite from the rigid, often philanthropically based art scenes of Dallas and Houston, and a city that fostered unbridled creativity. But as the city has changed and adopted some of the ideologies of its larger Texan neighbors, we're left asking: What does Austin offer visual artists now? Michael Anthony García holds the answer.

In 2001, Austin was a haven for the creatively minded who sought a home in Texas. It was the allure of Austin's energy and potential that attracted artist Michael Anthony García to settle down here more than a decade ago. "I fell in love with the city and its people," says García. After being raised in El Paso, attending Austin College in Sherman, Texas, and relocating temporarily to Dallas after graduation, García needed a home that spoke to his nature and could support his career as an artist. "Austin had a very small art scene back then," recalls García, and he felt isolated from the artistic community that the University of Texas fostered within its art department, as well as the galleries and exhibitions that catered to UT alumni. It felt like an insulated community that he was unable to access, and many of the opportunities available to more established talent in town simply didn't exist for lesser known artists. Collectives were still forming, and credible gallery space was expensive. Feeling uninspired and out of touch with his new professional surroundings, García put his art on the backburner for nearly three years as he established himself within the community and sought other artists with whom to align himself.

In 2006, Mexic-Arte Museum invited García to take part in its 11th annual "Young Latino Artists" exhibition, which offered him not only a new audience with whom to interact but also artists with whom he connected creatively and culturally. "We all had on name tags [at the 'YLA' opening], and I remember trying to put together the artists with the pieces, finding the pieces you liked and finding the people who made them," says García with a chuckle. One result of "YLA 11" was a newfound friendship among artists Hector Hernandez, Salvador Castillo, and García, who would later band together to establish the creative collective Los Outsiders.

The trio's first endeavor was reviewing exhibitions around town and uploading their criticisms online as parody videos. The artists created characters to help relay their opinions about galleries or shows debuting in Austin. These early projects were rough, almost aimless – mostly about testing the boundaries of the team's unified creative voice and seeing if anyone bothered to watch. But they also wanted to create a critical voice that they felt was necessary to encourage growth in younger artists who needed guidance in their work and presentation skills. The three had deeply different styles, each unique, which offered distinct perceptions about shows and artists. Their variety and fluid interests helped garner attention and put additional pressure on the group to hone their message. It became apparent that Los Outsiders was looking to bring attention to upcoming artists and offer them advice about how to show in Austin. The three began collaborating on group shows, bringing in new artists to work with. They started showing in Mexico and expanded their artistic vision to curation. As a testament to the group's hard work, Los Outsiders debuted "Hasta La Basura Se Separa [artcrush]" at Antigua Aduana in Nuevo Laredo in late 2008. García saw the first exercises in curation as a way to fluctuate between extremes, from working on personal ambitions to expanding his own arts education. It's a passion that has come full circle: García curated Mexic-Arte's most recent "YLA" exhibition, "YLA 18: Con/Juntos," which debuted June 7.

Los Outsiders grew to include new members and take on grander projects, and it received the Austin Critics Table Award for best group show in 2012. Its duty, however, has remained intact: to help budding artists find their way. García emphasizes that it's something he felt the arts community lacked for a long time. "It meant so much to see people believe in me and support me," says the artist as he remembers his first "YLA" show, and perpetuating a creative environment of reciprocity has become one of his many missions.

As a solo artist, García's mixed-media sculptures invite mundane objects to adopt new identities. The artist quantifies his work as found-object installations with a conceptual undertone. García pushes his work to explore the world around him, drawing from sci-fi and ideologies about selfhood. Most recently, García caused quite a stir with his installations in the People's Gallery at City Hall. When asked about the response to that work, García laughs and responds with a blunt: "Vocal." Portico, a webbed sculpture of white, collared dress shirts cinched together with red ribbon, hovers above City Hall's atrium staircase. Portico, which means "portal" in Spanish, indicates an escape to a world beyond the office, which constrains those in it – an insinuation that made City Hall's primary audience, its employees, bristle. His installation Exo XO involves a dense sculpture of interwoven ties and dress shirts – mostly García's, some "borrowed" from his brother's closet – layered on top of one another and confined to a wooden structure. Both works feel restrictive, and intentionally so. But since García, an artist whose day job is teaching pre-K, works outside of the hustle and bustle of office life, some have characterized the pieces as too "personal" and accusatory in nature. García shrugs off the criticism. "Maybe [those offended] should be uncomfortable."

García's art is loud and abrasive, but the artist himself couldn't be further from that. With a poised stance about his work and humble attitude about his success, García is deeply invested in the arts world with little bravado or fanfare. He is unafraid to venture outside the comfort zone of his immediate supporters. Being Hispanic, having long received support from those in Austin's Latino arts community, and having established Los Outsiders as a way to collaborate with fellow Latino artists, it would be easy to confine García to a stereotyped role as a Mexican-American artist, but that would discount his larger impact. He sees his influence with the Hispanic community as having more to do with who he is as a person than his actual art.

García identifies himself as an artist, an educator, a curator, a blogger, and a collaborator. He speaks to today's Austin because his role as an artist no longer means just making sculpture and mixed media; it can't. That kind of streamlined definition is as antiquated as a Rolodex. No artists here now can assume that success will come from simply creating – they must take on new responsibilities and endeavors that not only shape themselves personally but shape the larger Austin community. Adapting to the new norms means pushing existing creative boundaries and creating new ones to cross. It requires taking risks and looking for constructive criticism; when you don't find it, you become the critic. With García continually working to expand his creative skill set, there's no telling what this young artist might be capable of. He offers a reminder that this city is still open to nurturing the inventive and imaginative individuals who call Austin home, even if the available opportunities are more competitive than they used to be. It's through the dedicated work of García, and others like him, that the arts community is not only willing but also able to help new artists achieve their professional goals.

Asked what legacy he hopes to leave for the Austin arts world, García pauses thoughtfully before answering. He finally replies, "Maybe somehow strengthening the community in some way. Trying to do it in a nice way, so people feel respected. All of the things that would have really helped me, when I moved here, to feel comfortable to create art." With García in the mix, our city is destined to become more capable of addressing its budding artists with greater regard and support. His efforts are helping Austin evolve from a city with a creative culture to one with an accessible artists' economy. And while he may propose his hopes in a soft, modest light, make no mistake: Michael Anthony García is not asking for Austin to change with him, he's demanding it. And we're more than happy to go along with him.