All Over Creation: Ode to Joy

In a week's worth of creative endeavors, delight proves illuminating 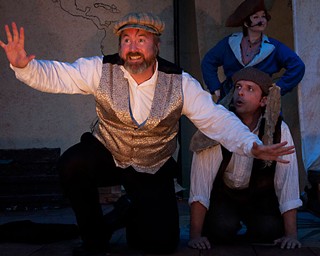 Short of the detergent aisle at H-E-B, I don't know when I've been face to face with so much joy.

Over the past week, in a half-dozen different places – including, curiously enough, given the above gag, a grocery store – I encountered that exultant, uplifting state of being through creative projects, and the thing is, they didn't just elevate my mood and set me smiling, but gave me a fresh appreciation for what an expression of joy in an artist can say about the artist.

It all started with Princess Ida, the latest in an almost four-decade string of productions by the Gilbert & Sullivan Society of Austin. Now, given the artfully crafted silliness that's kept the topsy-turvy team's operettas in constant production for more than a century, you would expect a G&S staging to generate a healthy amount of joy. But what was evident in the performances of Michelle Haché as the medieval feminist of the title; Holton Johnson as Prince Hilarion, her betrothed from infancy; and, perhaps especially, the choruses was a delight in the material itself, an unabashed affection for these dated musical send-ups, with all their ridiculous plots, clueless characters, extravagant wordplay, and exquisite music, which shone through whenever they burst into song.

That quality was even more apparent with Megan Hilty in her concert appearance at Zach Theatre. This blonde dynamo from Broadway and the faux Broadway of TV's Smash greeted the full house with a palpable enthusiasm, which could have been just a seasoned entertainer working the crowd ("Austin, are you ready to cabaret?") except that when she turned to interact with her pianist Matt Cusson and guitarist/boyfriend Brian Gallagher, Hilty radiated the same gleefulness – the ardent delight of someone doing what she most loves to do in the world with people she loves. And when she launched into an "Autumn Leaves" or a "Diamonds Are a Girl's Best Friend," vocally caressing the melody or nuzzling a lyric, not only did the sound ring out with her joy in singing, but the big pearly grin that spread across her face testified to it, too.

Seeing that kind of elation in a performer during a musical act or even playing a comic character as in Princess Ida isn't all that surprising since the nature of the work allows the performer to share his or her pleasure openly. The three actors spinning the adventurous yarn in Penfold Theatre Company's production of Shipwrecked! (still running this weekend at the Round Rock Amphitheater) have license to indulge in full-throated theatricality and seize the opportunity with the relish of every kid who's ever engaged in make-believe. "Look, I get to be a pirate," you can almost hear Julie Linnard thinking as she swaggers and "arrrr"s her way across the stage. "Look, I get to be a dog," Nathan Jerkins seems to be thinking as he kneels and barks under his flop-eared cap. "Listen, I get to tell you a story" is the message that gleams from Robert L. Berry's eyes as he addresses the audience and unpacks his narrative. Their delight is the fundamental pleasure of pretending.

Dramatic work, in which the pretense maintains a certain level of gravity, would seem to offer little chance of seeing an artist's joy. And yet, to my surprise, I sensed it quite clearly from the St. Edward's University student ensemble in The Secret Garden (running through June 30 at the Mary Moody Northen Theatre). In Marsha Norman and Lucy Simon's musical adaptation of the Frances Hodgson Burnett classic, the chorus consists of "Dreamers" – ghostly figures representing young Mary Lennox's life in colonial India, before her parents' death. They're embodied by these young performers with grace, gliding in and out of scenes, fluidly providing our sense of the past, but when they're called on to dance or sing, life ignites inside them, and they glow with a proud pleasure, the quiet joy of support.

The joy exhibited at the finale of Aztlan Dance Company's Loterialandia was anything but quiet. The eight dancers, who had spent two acts vigorously portraying various characters and images from the Mexican card game, shed their personas to dance together as themselves in a last glorious display of flashing, stamping feet. Like charged pistons, their legs hammered at the floor, producing staccato bursts of thunder, but from the neck up all was sunshine – faces beaming blissfully. The performers were having fun, but this was more than a good time, more than the satisfaction of a shared activity with friends or colleagues – something fuller, richer than that. Then I caught in the features of Artistic Director Roén Salinas an expression of both belonging and fulfillment, and it struck me that the joy that emanates from an artist – the true joy, the deep joy – is rooted in a love of creation and is released when the artist creates something and knows that this is what she or he is meant to do. It's personal pleasure bound up in a profound sense of purpose.

This epiphany of creative joy was still in my head when I stopped by the Westgate Central Market and encountered Kerry Awn's new Austintatious mural in the produce department. This mammoth painting is vintage Awn, with assorted local landmarks and icons dotting a Hill Country landscape at its most luxuriant and green. It's worth a good long look, so dense is it with images and visual jokes – Ann Richards with a hairdo of soft-serve ice cream, the UT Tower inside a longneck – and I'd be bewildered if it didn't elevate your mood and set you smiling. But as I pored over its cartoony genius and pitch-perfect characterization of our city at its most idiosyncratic, all I could think was, "What a joy."