The script for Penfold Theatre's latest outdoor production has its flaws, but what the company does with it is great 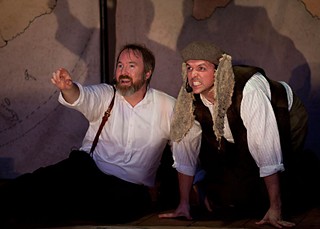 
For its annual summer outdoor production at the Round Rock Amphitheater, Penfold Theatre Company is presenting Donald Margulies' Shipwrecked! An entertainment: the amazing adventures of Louis de Rougemont (as told by himself) – a play with a very long title and a very good cast, under the direction of Penfold Artistic Director Ryan Crowder.

Louis de Rougemont (Robert L. Berry), the character mentioned in the title, leaves home as a young man to see the world of the 1800s. During a journey by sea on a pearling vessel, he finds himself shipwrecked, meets the native population, and has several grand adventures with curious wildlife. After 30 years, he returns to London to tell his story, and things become more complicated for him. Questions are raised about the value of believing in the fantastical and what happens when we allow ourselves a few flights of fancy.

The production is tight. Crowder's direction is quick and inventive, finding ways to use a simple set (designed by Gary Varner) and only three actors to show everything from sailors at sea to an army of attacking tribesmen. The show's greatest strength is its actors. All three are versatile and creative performers; Julie Linnard and Nathan Jerkins make up the ensemble of many smaller characters, and their timing is excellent. Also, Jerkins does such a great job playing a dog that at one performance, an actual dog in the audience became visibly pleased when Jerkins appeared as the character. Dude: You got buy-in from an actual dog. That is so cool.

Penfold's choice of play makes sense on many levels. It's family-friendly, and the story is broad enough to withstand the distractions of an outdoor space with the occasional freight train running nearby. It is fun and imaginative, and allows for broad strokes. The trouble is that the first two-thirds of the play contains almost no conflict. Sure, it's interesting to watch de Rougemont embark on his adventures and discover new people and places, but without any stakes or suspense, it lacks a reason for the audience to invest themselves in de Rougemont and what may happen to him next. Yet it's necessary to show this journey; otherwise, the questions that arise later in the story have no impact. So what's left is a structural flaw: We need to believe in and engage with de Rougemont on his maritime adventures in order to care about what happens later, but his adventures are so uncomplicated that they fail to really pull us in.

What Penfold does with the script is great, however. The company has again shown its talent for casting great actors in a show that seeks to engage its audiences in a fun evening of theatre.