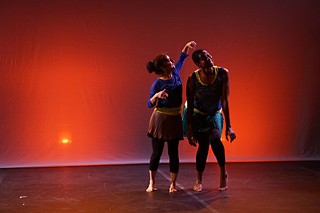 
It's widely known that participating in physical activity and creative endeavors are a way to clear one's head. But Gold Show/Rose Show, a joint concert by dancer-choreographers Heloise Gold and Julie Nathanielsz, were reminders of the power of empathy: In witnessing the films and dances, we audience members were invigorated, too.

First, Gold's "Quiet Movie," a slideshow of textured materials and natural objects, lulled us into a gentle pace and an observational state, the perfect condition in which to enjoy "Dream Birds," a new version of a 1982 work, in which Gold and Leigh Gaymon-Jones performed absurd avian sounds, movements, and rituals. In "Resonance," Gold allowed her body to tremble and languish in consort with the sound waves produced by percussionist Nick Hennies' mallets against a vibraphone. Though the sounds were at times piercing, the clarity of sound-made-visible was invigorating: During the piece, I realized, a corner of my mind tidily framed a problem that had been sitting there, muddily, for weeks.

Last on Gold's half of the program was "Noisy Movie," in which footage of Gold prancing atop what looked like a dented, upturned, circular feed trough, amid a desolate landscape, was juxtaposed with shots of Beverly Bajema (a collaborator of both choreographers) turning the handle of a large compost bin. Often, but especially in "Noisy Movie," Gold's explorations were reminiscent of child's play, and, as with children, play can be serious work. Bajema turned her compost, and Gold, her slight figure contrasting with the loud crashes made by her landings on the metal object, leapt from one side of the trough to the other, obsessed with the search for what might be found there.

Where Gold's observations were outward, Nathanielsz, with sensation-based movement, explored and observed inward. In "Yo, Genesis," a solo lit in rose (lighting by Stephen Pruitt), she was feminine, yet a being of anomalous nature: a creature without creature comforts. She danced mostly in silence, and, when a song did play, it was as if the music was a second dancer onstage. In Nathanielsz' work, gestures are removed from emotional attachment but retain intensity. The body is "available" to move from any starting point, in any direction, so there are physical non sequiturs and tests of momentum. Though the black-box setting was less ideal than the in-the-round seating at previous performances of "What Is Common," Nathanielsz' trio for herself, Gold, and Elaine Dove, the diversity in the dancers' sizes and appearances capitalized on our newly heightened powers of observation and kinetic awareness.

Gold Show|Rose Show
In the sequel to the 2013 concert of the same name, Julie Nathanielsz and Heloise Gold came at dance from opposite directions