In this program of work by Kathy Dunn Hamrick and Kate Warren, the seriousness of the dancers was never in doubt 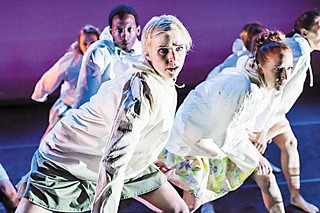 
You rarely doubt the dancers in Kathy Dunn Hamrick's shows. I arrived at this realization during Double Step, the Hamrick company's triple bill with guest Kate Warren/Circuitous Dance; the companies employ different dancers, but they share a common quality of earnestness. One might think being doubt-proof is a given foundation for performing artists – certainly, believability is a minimum skill for actors – but phoniness and strained expressions commonly plague dances in concert, from ballet to breakdance. There was no question, though, of the 14 dancers' seriousness about what they were doing, nor were there any unreliable narrators. Their body-mind-and-soul investment in the three pieces was evident, for example, in Warren's Flipped Earth, as five of them unflinchingly surveyed the panorama of the space, gazing out over their outstretched arms.

Warren's was a serious piece that seemed to reveal a swampy underworld, where the dancers' eyes occasionally met and their limbs curled around their bodies to form soft corkscrews. But earnestness is equally important for pulling off humor, as in Roxanne Gage and Mariclaire Gamble's Pity Party, performed by the Hamrick company. The "pity" was the result of injuries familiar to dancers (perhaps making earnestness particularly easy here), which instigated the "party": an exploration of movement achievable while limping, while restricting one arm at the shoulder, or with a stiff back.

The final piece on the program was Hamrick's The Big Small, a pretty piece that in many ways exemplified her quiet style. Hamrick doesn't make waves. Her dances are generally not weird enough to make you sit up straight all the time, but they sneak up on you, rocking you gently until, about two-thirds through, a shiny truth emerges just beneath the surface, like a revelation from a Magic 8 Ball. It wouldn't be possible without dancers devoted to the strategy. In The Big Small, with a nostalgic, faded-summer palette and atmospheric music by Michael Wall, text projections suggested ways in which our memories define time and setting: "a year and two months in the city," "a summer and a day." A folded piece of paper, carried and then dropped, was robbed – or perhaps relieved – of its context. Zoom out: Our context for The Big Small is one in which slick, onscreen experiences impede our formation of memories. In contrast, the dance celebrated what's left behind by physicality in space and time, a defense of the three-dimensional, the imperfect, the memory-leaving. 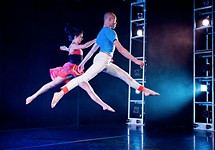 'Double Step'
Kathy Dunn Hamrick and Kate Warren bring their dance companies together, but they've been in step for decades