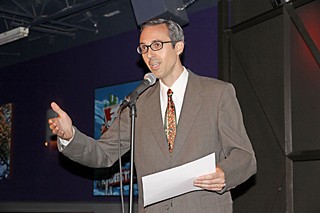 Sound designer Buzz Moran, accepting the award for his work on All My Sons, spacestation1985, and Under Construction, just before teaching the audience how to bark convincingly (Photos by Todd V. Wolfson)

The Hidden Room Theatre production of Rose Rage was the runaway winner at the Austin Critics Table Awards on Monday, taking home five honors during a ceremony that at times threatened to best the Shakespearean marathon's five-hour running time.

For its 21st presention of awards for notable achievements in the arts, the Critics Table welcomed five new members into the Austin Arts Hall of Fame and distributed honors in 50 categories. With the exception of Rose Rage, the awards were spread pretty evenly. Ten projects were recognized with two awards each: Texas State University Department of Theatre and Dance's Urinetown: The Musical; University of Texas Department of Theatre and Dance's The Edge of Peace; Zach Theatre's Ragtime and Xanadu; Palindrome Theatre's All My Sons; the Duplicates' The Poison Squad; Rude Mechanicals' Now Now Oh Now; Breaking String Theatre's Vodka, Fucking, and Television; Ballet Austin's The Taming of the Shrew, and Forklift Danceworks' Solo Symphony. In all, 65 productions, exhibits, works, and artists were recognized.

All My Sons, Palindrome Theatre

Barbara Chisholm, The Importance of Being Earnest 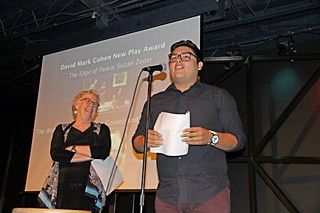 Recent UT graduate Isaac Gomez accepts the David Mark Cohen New Play Award for The Women of Juarez, which he co-wrote with Bianca Sulaica. Looking on is Gomez's mentor, retiring UT playwriting professor Suzan Zeder, who shared the award for The Edge of Peace, the conclusion to her Ware Trilogy. Gomez was also one of five recipients this year of the W.H. "Deacon" Crain Award for Outstanding Student Work.

Joey Hood, "I Am the Machine Gunner"

Fran Dorn, The Edge of Peace

The Poison Squad, The Duplicates

The Edge of Peace, Suzan Zeder

The Women of Juarez, Isaac Gomez and Bianca Sulaica 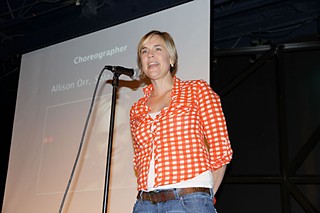 "Requiem for a Rose," Ballet Austin

Jamie Lynn Witts, The Taming of the Shrew

Ballet Austin, The Taming of the Shrew 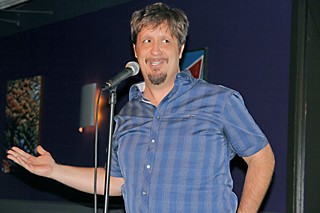 Robert Matney, winner for Acting in a Supporting Role for his work in Rose Rage, characterized the richness of Austin's creative community by telling the crowd, "New York may be our Rome, but we are our Florence."

The Duplicates, The Poison Squad

Icy Simpson, I, Too 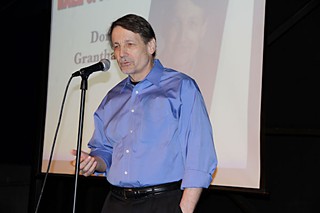 Pam Friday, Seven Wonders of the World (Plus One)

"W. Tucker: to stand in a boat that floats," Texas State University Galleries