All Over Creation: Head in the Game

In Houston, 'Warrior Class' and 'Road Show' show it is whether you win or lose 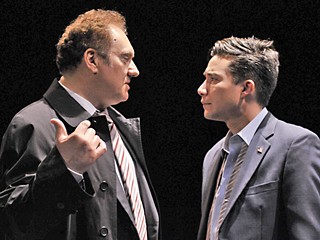 Kickball at recess. Freeze tag at twilight. Monopoly or Stratego or Clue at sleepovers. Games consumed a huge part of my childhood, as they did for most of my friends. Whenever I had a free moment and wasn't immersed in a comic or book (reading being my natural default activity), I seemed to be playing some game. Even for a kid who actively disliked competition and could be a spectacularly sore loser – oh, Putt-Putt, how you brought out the worst in me! – games were darn near irresistible. Over time, they've become more resistible, and, while I still savor the odd Scrabble match and regularly fire up the Solitaire app on my phone, games to me are the stuff of youth.

So it was curious to have games be my big takeaway from the two plays I saw on a rare road trip to Houston last weekend. I hadn't really expected them to share any qualities. I mean, the appeal of Road Show was that it was the most recent musical we have by Stephen Sondheim, and Stages Repertory Theatre was mounting the first regional production since its 2008 New York run. What could its story about the wheeling-and-dealing Mizner Brothers, scheming and scamming their way across North America in the early 20th century, have in common with Warrior Class, Kenneth Lin's of-the-moment political drama of a so-called "Republican Obama" faced with cutting deals to keep a skeleton from his past in the closet?

But the instant that the latter play's grizzled party operative told the candidate's past girlfriend (and present threat to his political future), "You can't play the game if you don't play the game," the words of the flim-flamming Wilson Mizner echoed in my ears: "The only thing that matters is the game." In both plays, characters see the activities they're engaged in as games, with rules to be followed and risks to be taken, all in pursuit of the Big, Fat Win. In Warrior Class, the game is politics, and winning requires a candidate to curry favor with the power brokers, keep the money flowing, vote the "right" way, and keep his dirty laundry out of sight. The big challenge facing Chinese-American Julius Weishan Lee is how far to go in appeasing his college ex, who claims he stalked her following their breakup. Buying her silence with a government job for her unemployed husband or a law degree and spacious 4/5 in Carroll County, Md., is just how the game is played. In Road Show, the game begins as literal – a poker match in which Wilson bets the claim that he and his brother Addison have been working in Alaska's gold fields – but then becomes any economic enterprise he embraces: managing a prizefighter, mounting a Broadway show, selling swampland in Florida. That last is the biggest and brashest game explored here; initially conceived as a city for artists to be designed by architect Addison for his lover Hollis, Boca Raton transforms into a real-estate racket once Wilson gets on board. Winning that game means selling the land, and the rules allow for any means necessary, even outright lies.

Both Stages' Road Show and the Alley Theatre's Warrior Class strikingly conveyed the thrills of their respective "games" – the enormity of the stakes, encompassing the entire future of a person or city, and the adrenaline rush that comes with making an all-or-nothing gamble. The three actors in Warrior Class – Nick Maccarone as the candidate, Caroline Hewitt as the former girlfriend, and Vito D'Ambrosio as the operative – worked beautifully together to escalate the tension of the "game." And as the claims for Boca Raton grew increasingly hyperbolic, Tom Frey's Wilson and L. Jay Meyer's Addison worked themselves up to a feverish intensity; you felt them in the grip of their game.

Here's the thing, though: The games of our childhoods rarely created problems for anyone but ourselves (well, okay, my mother when she had to clean up after my Putt-Putt tantrums). You might risk your whole bankroll on that Boardwalk hotel, but no one went hungry if you went belly up. Even a swing at a bad pitch for the final out in a Little League game didn't do more to your teammates than piss them off for a few hours (okay, maybe weeks). The difference with politics and commerce is that they affect many lives, and Road Show and Warrior Class depict the widespread devastation these "games" can wreak: careers derailed, livelihoods lost, families fractured, classes of people made to suffer. More disturbing, perhaps, is that whatever it is in the American psyche that wants to treat serious social endeavors as youthful competitions – it's all about winning and winning is all – seems invariably to corrupt whatever good it touches: a politican's ideals, a dream of community.

I found both productions compelling and entertaining and not a little dispiriting. Bad enough that the Mizners were gaming people into paying outrageous sums for sorry land in the 1920s, but now it's almost a century later, and our parties still treat politics like some Machiavellian sport. Isn't it past time for the screen to flash "Game Over"?