The 2013 class of the Austin Arts Hall of Fame

On any given date, Austin's cultural calendar offers so many options that it's almost overwhelming. That vitality in our cultural scene is owed not only to the creative types working today but also those individuals of earlier times whose initiative and commitment ensured that the arts had a place in the life of Austin. The Austin Critics Table established the Austin Arts Hall of Fame to honor those artists, educators, patrons, and arts advocates for their pioneering efforts in nurturing the visual arts, dance, theatre, and classical music, and for helping them to flourish. The Class of 2013 includes five local heroes whose years of activity in the arts made significant connections – between art and audience, between yesterday and today, between highbrow and lowbrow. They will be inducted in a ceremony during the Austin Critics Table Awards on Monday, June 3, 7pm, at the Cap City Comedy Club, 8120 Research. Here is a brief introduction showcasing why they matter.

The arts are news. That message may not stop the presses in this post-Richard Florida era, but in 1993, when Michael Barnes started covering the cultural beat for the Austin American-Statesman, the arts rarely rated notice outside the Lifestyle section. Over the next decade, though, this theatre historian from Houston proved himself a dogged reporter who regularly landed arts stories on Page One. Already an established critical voice – he began penning Statesman reviews in 1989 – Barnes became invaluable to the scene with canny reports on the arts' economic impact, attendance, and construction projects such as the Long Center and Mexican American Cultural Center, giving legitimacy to the creative sector at a time of unprecedented development. Wherever he saw an opportunity to increase the arts' visibility or impact, he took it – even within the critical community. He suggested that the local theatre reviewers who met regularly for lunch hand out group awards as critics in other cities did, and the Austin Critics Table was born. Later, he encouraged the expansion of the Critics Table Awards to include all performing and visual arts. His work in the American Theatre Critics Association led to three terms as chairman of that organization, and two terms on the Pulitzer Prize jury for criticism. He's also shared his knowledge with the next generation of arts writers, through ATCA Young Critics Seminars, which he co-founded, and entertainment journalism courses at local universities. Though he has in recent years moved on to the post of the Statesman's social reporter, Barnes continues to showcase the arts' vitality and importance through profiles of Austin creatives. Most people probably imagine being a "curator" means just choosing which paintings to hang on the wall and where. For Annette DiMeo Carlozzi, though, the job description includes starting conversations. Through her carefully considered placement of works in an exhibition – such as the recent "Through the Eyes of Texas" or the Austin Critics Table Award winners "Desire" and "Mike's World" – the Blanton Museum of Art's curator-at-large can use the works' similarities and differences in the treatment of subject matter, form, color, composition, and the like to set up dialogues among them, and that in turn sparks dialogues with and among viewers. Since Carlozzi first arrived on the local scene in 1979, stimulating lively chat with art and about it has been her goal, and in her seven years at Laguna Gloria Art Museum (currently one component of AMOA-Arthouse) and 17 years at the Blanton – between which Carlozzi spent a decade outside the city, directing the Aspen Art Museum and the Contemporary Art Center in New Orleans and serving as visual arts producer for the 1996 Olympics Arts Festival – she has succeeded spectacularly. That isn't to say that Carlozzi is all talk. She's also a gifted writer, whose 1986 book, 50 Texas Artists, was a groundbreaking effort in treating contemporary Lone Star artmakers seriously at a time when the national arterati still dismissed the state as little more than bluebonnet paintings. But whether her comments are written or spoken, Carlozzi consistently delivers a thousand words worth a picture.

Austin Symphony Orchestra. Austin Civic Orchestra. Conspirare. University of Texas Trombone Choir. Chamber Soloists of Austin. Chorus Austin. Austin Chamber Music Center. Wild Basin Winds. UT Wind Ensemble. Texas Choral Consort. Austin Chamber Ensemble. UT Chamber Singers. Waterloo Sound Conspiracy. Hill Country Middle School Symphonic Band. If you were asked which composer has had his work performed by all these area ensembles, you'd probably go to one of classical music's Big Boys: a Bach or a Beethoven. The fact that Donald Grantham can claim the same speaks to both the community's interest in the music created by this Butler School of Music professor of composition and his deep commitment to the cause of classical music in Austin. In his 38 years on the faculty at the University of Texas, the award-winning composer – the Prix Lili Boulanger, the Nissim/ASCAP Orchestral Composition Prize, first prize in the Concordia Chamber Symphony's Awards to American Composers, first prize in the National Opera Association's Biennial Composition Competition – has nurtured dozens of aspiring composers. But he's been just as active off-campus, accepting commissions from organizations of all sizes and levels of experience, and always delivering scores of remarkable feeling and lyricism. Whether it's with tender memorial choral pieces such as "We Remember Them," frisky frolics for wind ensembles such as "Baron Cimetière's Mambo," or his award-winning score inspired by a museum's art collection, Music for the Blanton, Grantham has displayed a desire to explore new musical territories and open them to all corners of our community.

Ballet at the 'Dillo – hold that image in your head: Austin's quintessential music venue, the Armadillo World Headquarters, and in the midst of all the cosmic cowboys and blues-lovin' hippies, among the nachos and longnecks, were ballerinas doing arabesques and jetés – and not just as a one-off, but every month. That is part of the remarkable legacy of Stanley Hall, made all the more remarkable because he wasn't a laid-back native but a classically trained Englishman with credits in the Vic-Wells company (later the Sadler's Wells, then Royal Ballet) and Les Ballets de Paris. But before settling in Austin in the late Sixties, Hall had made the leap to Hollywood and Broadway, dancing on stage and film in shows such as Carousel, Oklahoma!, and Gentlemen Prefer Blondes, as well as nightclub acts with Abbott and Costello, Betty Grable, and Liberace. Hall was invited to town to take over artistic direction for Austin Civic Ballet (now Ballet Austin), but it was after launching his own company, Austin Ballet Theatre, in 1972, that Hall's impact was most felt. For 14 years, the company provided low-key access to highbrow dance, building an unusually large and diverse audience for ballet – attendance at ABT's 'Dillo performances topped 1,200. And through the company and classes that Hall taught through UT's physical education program, he trained many of the city's leading dancers, including Greg Easley, Terri Lynn Wright, Septime Webre, Arletta Howard, and John Logan. In many ways, Hall – who died in 1994 – was a father to Austin's early dance community. 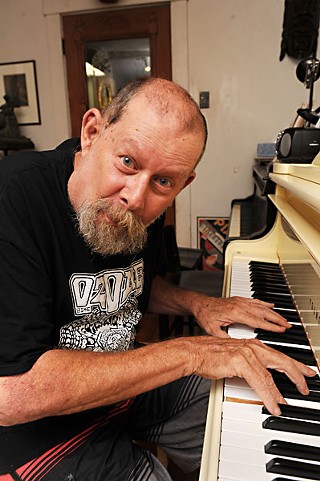 When classical music gets too stiff and stuffy for its own good, someone has to knock the powdered-wig brigade off its pedestal, and, for 35 years, Steve Saugey has proudly done that duty in Austin. With a satirical scalpel as sophisticated and cutting as Tom Lehrer's or Peter Schickele's, this classically trained musician sliced his way through the classical canon, typically weaving sitcom tunes, pop hits, and commercial jingles through their majestic passages. From 1977 to 1996, Saugey mocked the masters regularly at Esther's Follies, playing accompanist to the fractured operatics of William Dente's Dame Della Diva, making Beethoven roll over with his "Ode to Joy (Detergent)" and cramming every pop song ripped off from a Bach melody into his "Brackenridge Concerto," not to mention roasting chestnuts of all kinds in the parody musicals A Mall and Its Night Visitors and Westward Hose! With his frequent partner in musical mischief, Lyova Rosanoff – also a Follies alum and an Austin Arts Hall of Fame inductee in 2003 – Saugey has worked his parodic genius in independent projects such as Austin Flops Orchestra, Beethoven's Birthday, and Forbidden Classics. And the two masterfully and riotously transmuted the lyrics for Strauss' Die Fledermaus into a current-day Austin-centric version, The Bat, for Austin Lyric Opera. While he's capable of being serious for brief periods – as evidenced by his work as music director for musicals with Arts on Real and Penfold Theatre Company and rehearsal accompanist for Austin Musical Theatre and Ballet Austin – Saugey is best at his worst – mockingly making fun.