Though often entertaining and quite humorous, this Trouble Puppet show seems to be missing something 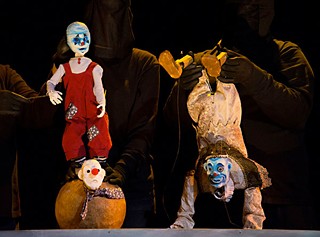 Clown-destine activities: the Moe, Larry, and Curly of The Cruel Circus (Photo courtesy of Stephen Pruitt)


I first became acquainted with Trouble Puppet Theater when I saw its 2011 production of The Jungle. To my surprise, it was one of the most moving theatrical events I had ever experienced. As it was my first encounter with professional puppet theatre, I hadn't expected to be so transported. But the pathos and message of Upton Sinclair's novel were adapted with such astonishing creativity and craftsmanship by Artistic Director Connor Hopkins and company that I left the theatre with an entirely new appreciation for the poetic power of puppetry.

This experience had me especially excited to take in Hopkins' newest creation, The Cruel Circus. The evening got off to a rocky start with two separate patrons accidentally stumbling into a footlight that illuminates the show's stage-upon-a-stage as they were seating themselves. But, with a little troubleshooting, the light was refocused and everyone settled in for the 20-minute preshow, fantastically performed by Cami Alys. For me, Alys – part punk-clown, part expressionist cabaret chanteuse – provided the highlight of the evening. Her performance was specific, entertaining, poignant, and quirky, all wrapped in a wonderful showcase for her big voice and acting acumen.

From that high point, the evening seemed to decrescendo. I found myself growing restless about a third of the way into The Cruel Circus. I suspect that the primary factor for my disappointment was the absence of many of the qualities I had found so riveting in The Jungle. In that production, the puppeteers had factored more heavily in the story, dressed as meatpacking workers grinding away in a slaughterhouse. The pathos of the puppeteers themselves – the pain on their faces, the particularities of their movements with and without their puppets – had reinvented my idea of what puppet theatre could be. Not to mention the searing, serious topic that had been adapted for puppets, opening my mind to a brilliant new theatrical frontier.

By contrast, here the puppeteers wear black outfits and hoodlike masks, erasing themselves from the scene. Although the production clearly intended to be abstract in its thrust (an aesthetic that I'm generally drawn to), it also seemed to place a great deal of importance on promoting a linear narrative of some sort. But the execution of it didn't provide enough clues to the series of events unfolding. There was a bit too much "kitchen sink" to this circus; although many of the vignettes were entertaining and quite humorous, I kept feeling as though there was something that I was supposed to "get" but just couldn't figure out. That said, Trouble Puppet again proves itself to be a company fueled by extreme creativity and master craftspeople, attributes much in evidence in the spirit of this Cruel Circus.