A man walks into a bar.

The man is Michael Jastroch of ColdTowne Theater, and he's in the mood to 1) drink a dirty martini, and 2) tell people about the upcoming Austin Sketch Fest. He'll need the martini to soothe his nerves when yet another citizen, not really clueless but somehow unblemished by certain areas of knowledge, asks him what he means by "sketch comedy" and Jastroch has to reply, for the umpteenth time this month, "You know, like Saturday Night Live?"

Jastroch is, luckily, a man who likes martinis almost as much as he likes the word "umpteenth."

And Austin is, luckily, a city about to be inundated with a weekend of enough sketch comedy to make a person say "Saturday Night who?" The producers from ColdTowne have joined forces with video savants Arts + Labor and the Humordy web-comedy collective and others to bring together some 20 local troupes and comedians; others from beyond Texas' borders, such as LanceLife, a one-man infomercial-style show from Portland, Ore., and the Upright Citizens Brigade troupe Beige (with former Austinite and foodie prankster Kelly Hudson); and a few nationally renowned Big Names In The Industry, among them Mr. Show cast members Paul F. Tompkins in Superego and John Ennis, performing with Matt Kaye.

Although Sketch Fest had its start four years ago and Austin is home to such longtime sketch institutions as Master Pancake Theater (who are part of this fest) and Esther's Follies (who aren't, though they'll be doing their own hilarious thing on Sixth Street, as usual), the sketch scene here has only recently started holding its own among the local bastions of improv and stand-up. Why that is may be related to the sheer effort needed to work as a team (which stand-up doesn't require) and prepare and learn scripts in advance (which improv does without). So much of sketch comedy – like the part of the iceberg that famously destroyed the Titanic – is about the writing. ColdTowne's Jastroch knows that like he knows a good martini. And other Austin Sketch Fest performers know it, too:

"We like improvising," says Taylor Overstreet of local troupe There's Waldo, "but, I don't know, there's just something about the seven of us working together. We all have different personalities, but we found a really strong voice in sketch. It's a little weird, a little twisted – I don't think I could come up with some of this stuff on my own, but together it really works." There's Waldo, perhaps best known for its Human Santapede holiday show, began as an informal writing group started by Asaf Ronen and Tom Booker at the Institution Theater about four years ago. "Now we write two original, full-fledged shows a year," says Overstreet. "Well, three, with the Christmas show. And each of them is around an hour, hour-and-a-half, maybe 15 or 20 sketches. And we usually write more than we can fit in a single show and wind up cutting stuff."

"Some sketches are written independently by one person," says fellow Waldonian Amy Dietze, "and [that person will] bring a script to the group, and we'll perform it. Or sometimes we're all sitting around, having some beers, and we'll start doing a bit, and we'll improvise it further and further, and then, if it works, we'll write it out and polish it. It happens both ways – maybe equally." 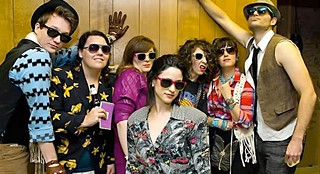 "I think it's also easier to do sketch right now," adds John Buseman, "because there's not as much of it as improv. You stand out more, as opposed to being just another improv group."

There's Waldo might have its work cut out for itself, though, having to stand out in the same ASF Thursday night slot as Stag!, a veritable supergroup comprising performers from sketch powerhouses Master Pancake, Mascot Wedding, and Ramirez & Gilstrap. There's seven of them, too, and they perform locally and travel around the country – also, Toronto – performing their well-honed sketches.

"This is a troupe of me and the six funniest people I know," says David Jara of Stag! "And whatever we come up with, we'll put it out there."

"The writing process boils down to just trying to make each other laugh," says Stag!'s Mac Blake, who also works the stand-up circuit as well as Mascot Wedding. "We generate a lot of scripts, and we'll read them and talk about them as a group. And then there'll be a second draft, and we'll narrow that down and go from there. More editing, stuff like that. And things change, too, after you do it live instead of just reading it as a group – depending on who does what role. You make these little discoveries along the way. But we're all pretty funny, so if we read a script and everybody's silent, nobody's laughing, it's like 'Ah, good job – but maybe not this one.'"

But enough scripts do make the cut, do get the polishing, and proceed to live action on a comedy stage with distinct characters, props, costumes, and whatever it takes to make an audience laugh. And the pay-off's always worth the effort, right?

"Well, ah," says Blake, "sometimes I kinda think the smart thing to do would be to say 'Fuck live performance' and just make short videos and put them online? That might be smarter? But I really like performing live, especially with everybody else in Stag!"

"Your Terrific Neighbors are pretty much the gold standard," agrees Jara. "Aside from us, of course.

"They're, yeah, they're the best," says There's Waldo's Dietze.

"A-whuh?" responds the Neighbors' Luciani. "Do people really say that? If they do, that's insanely flattering."

Well, yes, they do say that. And why might it be true?

Luciani ponders. "I guess we try to keep a broad perspective on what sketch comedy is and can be," he says. "We have love for classic sketch structure – premise, heighten, heighten, punch line – and we have plenty of material that adheres to that, but we're also comfortable with being weird and silly and theatrical and even, on occasion, heartfelt. So we hope that the result is a memorable experience beyond the laffs."

Right, laffs. And why bring them to Austin Sketch Fest in particular?

"Austin has several comedy festivals these days," says Luciani, "but this one brings you the bounty of cheap props, unconvincing wigs, and lightning-quick costume changes that only a gathering of sketch comedy troupes can provide. Sketch comedy nerds are curious beasts, even within the already nerdy, sallow, and maladjusted wider world of comedy. We're comedians with theatre damage."

Your Terrific Neighbors will perform in Saturday night's star-studded showcase. By which time ColdTowne's Michael Jastroch, tallying box-office receipts and wondering how much he might get for that Paul F. Tompkins-autographed tortilla on eBay, will have downed his umpteenth dirty martini and, if the previous year's agenda is any indication, already be planning for Austin Sketch Fest 2014. 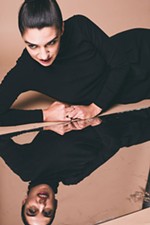