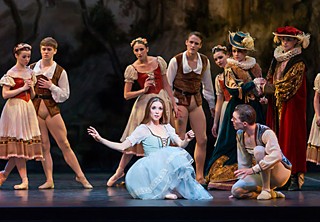 
Giselle's mad scene is one of the most melodramatic moments in romantic ballet: In the music, eerie echoes of sweet motifs dissolve into high tremors and low rumblings, while the peasant girl's hair comes loose, her eyes stare vacantly toward the balcony, and she threatens to plunge a sword into her bosom before dropping dead of a broken heart. And yet if things are more or less right, as they were in Ballet Austin's May 11 performance, Giselle's fragile loveliness makes her torment devastating, and we're right there with her.

As the hapless girl jilted in Duke Albrecht's amusement-turned-nightmare, Ashley Lynn Gilfix was sweet, and in the second act among the maiden ghosts, or wilis, she was flawless and ethereal, though human enough to hold all her grief and compassion for Albrecht. As Albrecht, Paul Michael Bloodgood did not muddle his landings – it was his best performance of a classical role that I've seen – and he was a reliable partner for Gilfix.

Which, as evidenced by the peasant pas de deux, is nothing to scoff at. In this cutie-pie duet, Beth Terwilleger's dancing had sparkle and speed, but her usual joy in dancing seemed restricted, probably because her partner, Preston Andrew Patterson, was terrifying. His arm shook while promenading her; he looked ready to drop her in a shoulder lift. While Patterson may have the best male potential in the company – he's got line, jumps, and turns, oh my! – he needs development of upper body strength and coaching in partnering. To his credit, Patterson didn't look terrified at all; his dancing was joyful and boyish. Confident joy was what I've come to expect from Terwilleger, too, and it's a crying shame that in her final solo performance with the company – Giselle marks her last show after eight years – it was compromised.

Rebecca Johnson as Myrtha, queen of the wilis, proved that development does happen in the company: With liquid bourrées and severe grace, she seems to be on a path to new refinement. The corps de ballet in both acts was whole enough, but at times, the music – though generally well played by Austin Symphony Orchestra, conducted by Jeffrey Eckstein – became as plunky as a metronome, and the dancers' movements, in turn, were soldierlike. In the white act, Jaime Lynn Witts, as the wili Zulma in the first row of the corps de ballet, was a diaphanous exception, reaching with every fluid, endless step. 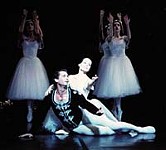