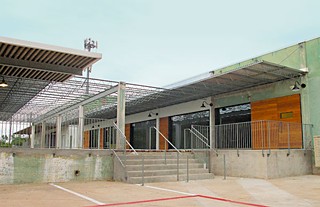 Building 2 of the Canopy's three-building complex, and the breezeway connecting Buildings 2 and 3 (Photos courtesy of Matthew Irwin)

Lynn Brotman is closer to her dream than she's ever been. The retired merchandiser and her husband moved to Austin from points east in 2011. For years, she had worked on her fabric designs ad hoc from the kitchen table, and she had endured the heat one summer in the garage of the Austin Screen Printing Cooperative. But the native Texan really began to see her work evolve when, back in February, she moved into Canopy, the new Eastside studio complex run by the ubiquitous arts organization Big Medium.

Brotman considers herself an outsider artist – someone, she says, who hasn't any formal training. But, today, she shares a 400-square-foot studio with illustrator Kate Smith, who works nights and weekends – the opposite of Brotman's schedule. "I have space for all my supplies: stamps, dyes, bleaches. There's good ventilation here," Brotman says, adding that she spends a lot of time walking around, meeting other residents. "My door is open all the time."

Eastside artists have been talking about their desire for clean, spacious, and affordable workspace since the early days of the East Austin Studio Tour, which, for all the positive attention it has brought to the neighborhood over the last 12 years, has also demonstrated the rather DIY nature of the studios there, a fact much worn by local code-carriers. (See "East Austin Studio De-Tour," News, July 15, 2011.)

So the announcement that the everything-it-touches-turns-to-gold-paint Big Medium would renovate an abandoned warehouse for art-making and art-viewing in the heart of the Eastside created an instant buzz and many emails of interest.

Then, the prices were listed and tenants started moving in. 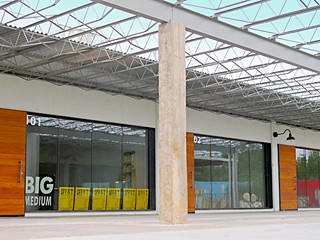 Canopy became the subject of ridicule from artists and neighbors concerned that the project would provide for a certain type of creative person, while driving up prices throughout the neighborhood. Starting at $500 a month, critics say Canopy is out of range for most East Austin artists.

Big Medium – known as the founder/executor of several major art programs, including two citywide studio tours, EAST and WEST, and the Texas Biennial – began thinking seriously about a large multiple-studio space about three years ago, according to the organization's co-founder Shea Little. He and his partners, Jana Swec and Joseph Phillips, had their eyes on 916 Springdale, a former Goodwill Blue Hanger store.

As happens in Austin, they ran into the developers one day, Little says, and eventually worked out a deal for a master lease, leaving them the responsibility of filling 45 studios, three galleries, a cafe, and a few multi-use spaces. The well-lit, finely manicured studios opened in February, though tinkering continued for another month.

By mid-April, the sudden clanks and monotonous thumps of renovation had given way to iPod stereos, small-talk chatter, and the drum of air conditioning units as the first tenants settled into the rhythm of their work.

Like other residents of the handful the Chronicle interviewed, cut-paper artist Rebecca Rothfus had been working at home until she heard about Canopy. With her application accepted, she moved, aware that the building would not be quite finished. "There were some growing pains," Rothfus says, referring to spotty Internet access, an occasionally malfunctioning elevator, and construction noise.

Overall, however, Rothfus is beside-herself happy. The Big Medium name, she says, has a demonstrated ability to follow through. Plus, the location of Canopy in the hip Eastside is also attractive. It's staked next to Blue Genie Art Industries, a longtime anchor of East Austin arts with its own decade-old Holiday Art Bazaar. To the right of Blue Genie is Blue Theater and to the left, the Museum of Human Achievement. 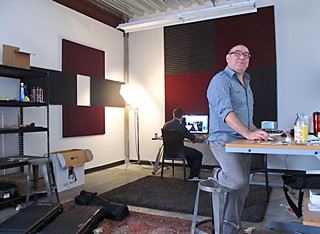 Rothfus also cites "creature comforts" such as cleanliness and air conditioning, the cost of which is not included in the rent, as benefits she hasn't seen elsewhere. She recalls hearing from an artist friend in Dallas, whose studio leaks during storms and gets unbearably hot in the summer – the time when Rothfus, a grade school art teacher, would have the most time to work.

Finally, like every one of the tenants we interviewed, Rothfus says that Canopy is affordable. Sure, the cost pushes her comfort level, she says, but it also demands total dedication. "[Canopy] was really built for people like me, who want to push further. It pushes me to experiment."

Blue Genie founder Kevin Collins, who lives on the Eastside, says that Canopy brings value to the neighborhood, but not necessarily for longtime residents.

"[Artists are] kind of an insular community, so ..." he says, trailing off. "For longtime residents, the gentrification issue is very real. When they see the Canopy spaces, they think, 'There goes the neighborhood.'"

In fairness, Collins says that he's a supporter of Big Medium and its projects to promote Austin artists. He's just wary that too much attention will drive up prices, making affordable art space even more difficult to acquire. A number of artists that the Chronicle informally surveyed during the recent Fusebox Festival share that fear. "I've been benefiting from cheap studio space for 15 years," Collins says. "Do I see my neighbors reflected [in Canopy]? Most of the artists I know still work in their garages."

Little acknowledged that about half of Canopy's residents live elsewhere in Austin, but he sees that as positive. People are willing to drive to the Eastside now, whereas 10 years ago, they would go out of their way to avoid streets east of I-35. 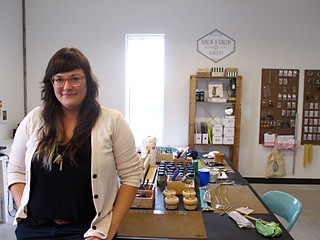 More than half of Canopy's units accommodate "creative businesses" — advertising and marketing firms and commercial arts enterprises such as publishing consultants EmDash and the small press A Strange Object – though the committee felt strongly that it had to reserve space for studio artists, many of whom split the costs with other artists. "We try to keep it diverse with the studio arts, because we don't want an office complex," Little says.

Among the creative business tenants, Ricardo Medina, who runs the commercial film company Fine Blend Media with his buddy Chad Nickle, and Jessica Tata, who operates Son of a Sailor Jewelry with her husband William Knopp, both say that moving in has led to an increase in business as well as personal productivity. But what they really appreciate about the space is the ability to network and brainstorm just by walking out their doors.

"We came to Austin for a sense of collaboration," says Tata, a former fine art administrator who moved from San Francisco with Knopp. "At places like [Canopy], we create alongside each other. It's not an untouchable elite."

Conversely, Tata sees Canopy's galleries as a much needed attempt to curate and elevate Austin art if it's ever to be properly unveiled to the rest of the art world.

Little says that filling the empty units is just a matter of placing the remaining applicants. He's more concerned with filling the galleries and making Canopy into an arts hub for all of Austin. "We want to create what Austin lacks," he says, "which is some density. Three galleries isn't much, but three in one row is good density in this town."

If the gallery spaces don't fill, Big Medium will open them to retail clients, preferably to an art supply store or a market for items made by local artists and craftspeople – perhaps Canopy residents, such as Son of a Sailor or Lynn Brotman.

For the time being, Brotman is happy, living just five minutes from her studio by car. The only thing better, she says, would be a live/work space. "You know: live upstairs and work downstairs," she says. "That's my dream."

The first Canopy Artists Studio Tour, an open house for the creative complex and its tenants, will be held May 11-12: Saturday, 10am-5pm; Sunday, 11am-5pm, at Canopy, 916 Springdale. For more information, visit www.canopystudios.wordpress.com.