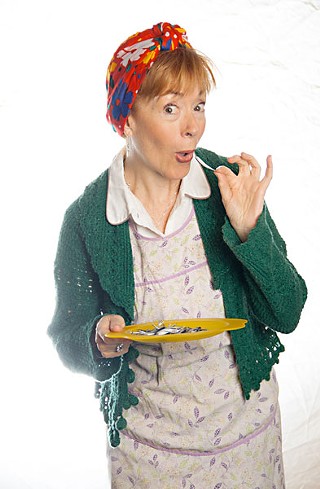 Those damned sardines: the cross that Dotty (Bernadette Nason) bears in Noises Off's play within the play, Nothing On (Photo courtesy of Christopher Loveless)


There aren't many shows that make one appreciate the value of a really good running crew – the all-but-unsung heroes of the theatre world without whom staging most plays would be pretty much impossible. Noises Off, as mounted by Austin Playhouse, is a show that is so complicated and so carefully choreographed that one can't help but admire just how good the running crew is under the leadership of production stage manager Barry Miller.

Michael Frayn's play does get one thinking about theatre from all angles, as it were. The first act shows a company of actors enmeshed in a chaotic dress rehearsal for a fictional farce called Nothing On. Director Lloyd Dallas (David Stahl) marshals his actors through their paces, battling his own ego and their idiosyncrasies and poor memories in an eleventh-hour attempt to get through the show once, just once, before opening. But the second act pulls a literal 180, featuring a run of the same play, but this time from backstage.

Noises Off includes two intermissions, and if your knees can handle remaining in one place for that long, it's worth watching the crew disassemble and reassemble the entire set. Designer Patrick Crowley's work is dictated by the play's strict requirements – two floors of doors that must be opened and slammed shut many, many times – but it's still fun to see how the company presents the set and many props (from designer Holly Crowley).

Noises Off is a farce. It is chaotic and ridiculous, and its characters run about in a state of hysteria for most of the show, which requires careful choreography and actors with excellent timing. The second act is perhaps the most enjoyable, as we see the actors silently engaged in their own battles of jealousy, desire, anger, and desperation, only to be interrupted by the unavoidable need to show up on the other side of the set, in character, at that very moment.

Don Toner's direction is admirable in that the actors hit their marks with precision – no small feat in a show like this. Opening night saw the cast almost but not completely in sync with their performances. At times, actors seemed to anticipate the quick, farcical leaps from passion to panic – knowing that in about two seconds, one would need to switch gears from nursing a bloody nose to dashing up the stairs, or from serene meditation to girlish flattery, so the critical element of surprise wasn't quite there. Like the bottle of whiskey pursued by the elderly, hard-of-hearing, and alcoholic actor Selsdon (Tom Parker), that sense of spontaneity is very much within reach, if the actors can just get their hands around it. One hopes that as the run continues and the actors gain greater ease with their complicated parts, this fun and enjoyable show will land on that little detail of rhythm that takes a performance from good to great.