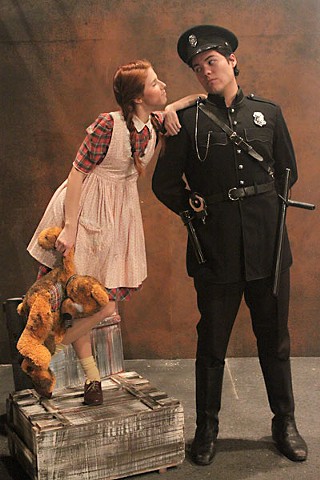 
Had I been more hydrated before watching Texas State University's delightful production of Mark Hollmann and Greg Kotis' Urinetown: The Musical, I might have laughed hard enough to pee my pants. I avoided that embarrassment, but the stellar ensemble nonetheless kept me in stitches throughout the satirical tale of a corrupt, water-deprived city where everyone's gotta pay a fee to pee. Though every single student shone, I was particularly impressed with the sophomore stars. Gabriel Bernal as Officer Lockstock and Sydney Roberts as Little Sally provided laughs by the barrelful as our trusty metanarrators; Betty Marie Muessig channeled Rosie the Riveter as hardy bathroom operator Penelope Pennywise; and Glenn DeVar as hero Bobby Strong made all the ladies swoon with his dashing good looks and even better singing voice.

Under Kaitlin Hopkins' spot-on direction, the cast obviously had a whole lot of fun striking a balance between camp and seriousness, and their vocals were splendid, particularly in the gospel number "Run, Freedom, Run." The student designers joined the charge: Patrick Crossland's bold lighting heightened the goofy drama with dramatic shadows, Andy Forbes' set changed smoothly from grimy toilet stalls to the decadent digs of villain Caldwell B. Cladwell (a narrow-eyed Phillip Cole White), and Desiree Humphries' eclectic costumes gave ensemble members the freedom to create unique characters (Gino Chaviano as Hot Blades Harry and Gianna Yanelli as Little Becky Two Shoes were wonderfully silly). But the number one part of Urinetown was undoubtedly Cassie Abate's fresh and funny choreography. The new head of dance in musical theatre, Abate proved her chops with movement as diverse as the show's songs, from lively Fred-and-Ginger swing to a goosestepping cop rap.

If Texas State's flawless production of Urinetown is any indicator, the place has a damn good musical theatre program. Their strong cadre of triple-threat performers, practically professional student designers, and excellent faculty leadership all but guarantee that the journey down I-35 will be worth your while. Not to mention that they've got the coolest theatre south of Riverside Drive – it's protected by a moat, for crying out loud! And the university is just months away from opening a new performing arts center, complete with its very own parking garage, which will no doubt be a relief for the droves of Austinites who rush to purchase 2013-2014 season tickets after reading this review.

My only complaint about Texas State's productions are that their weeklong runs are too darn short. You've already missed Urinetown (it closed Sunday), but keep Texas State at the tippy top of next year's theatre calendar. The lineup has yet to be leaked, but I have a feeling that you're in for a treat. 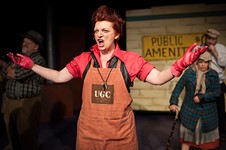