Stuck in the Middle

With Julie Goldman, how butch is too butch? How rough is too rough? 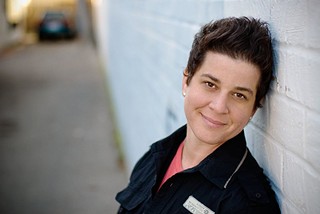 By all rights, wickedly funny no-holds-barred comedian/actress Julie Goldman should be a star. She's had the breaks: a small but memorable appearance as Meadow Soprano's college pal in The Sopranos; a founding slot in Logo TV's The Big Gay Sketch Show; plus, writing for Joan Rivers' Fashion Police. Unfortunately for the comedian, who's been "up-and-coming" for the last decade, she's a type. Goldman occupies a strange but adorable middle ground between John Goodman and Rachel Maddow, with a little twist of Joan Collins to queer things up. TV and movie roles don't exactly land in her lap.

Currently, Goldman works with Brandy Howard on the podcast Julie & Brandy in Your Box Office for popular lesbotainment site Autostraddle.com. The struggling duo skewers current box office hits – less Mystery Science and more Sister & Shebert – talking smack about blockbusters until the funds are raised to make their own.

I caught Goldman while she was driving to audition for a television role.

Austin Chronicle: You're on a casting call?

Julie Goldman: For the TV show Wilfred. The character's supposed to be disheveled and looking to be Elijah Wood's roommate. Whenever I get called in to auditions, it's always with black ladies. [The producers] are never sure: "Should we make it a lesbian or a black lady? We gotta do diversity!" Generally, they go black.

AC: You are very lesbian. How gay is too gay?

JG: I'm looking into a wig and a blouse for future auditions. I'm not kidding. I'm about to Tootsie this town. The sad thing is, I'm already a woman. I like doing lesbian stuff, but we don't get to do comedy. Everything is super sexual, predatory, or cool. There's never anything really funny.

AC: What topics won't you touch? What's the line between comedy and "don't go there"?

JG: For me, in comedy, it's all or it's nothing. Inappropriate or rough comedy is good for people. It breaks down the bullshit. In my experience, people just hear a word, and it triggers this thing in them, and they get offended. But what offends you doesn't necessarily offend me.

AC: What is your personal tipping point? I mean, you work with Jonny McGovern, the "Gay Pimp."

JG: Jonny and I made this video for a show for the L.A. Gay and Lesbian Center. We took that Reese's Peanut Butter Cup commercial – "You got your peanut butter in my chocolate!" – and reinvented it: "You got your gay in my lesbian!" So, Jonny's eating the peanut butter, and he goes, "Mmmmm, faggoty!" and we thought, that's adorable! But the center made us cut it out, because we're not allowed to say "faggot" in our community. That is so lame. In comedy, half of what it is, is what you're not saying. For example, I could say, "XYZ, faggot faggot rape AIDS ..."

AC: Oh, God. You just made me laugh. Isn't comedy supposed to give us the free pass to explore delicate areas?

JG: Probably the biggest hot button right now is still race. We did an In Your Box Office on Hunger Games. So I start the review, "That one's fat; that's the ugly one," and then I said, "One of my favorite characters was the little black girl." People wrote in and said, "You're racist!"

JG: I think it's a simplistic, corny, misguided song. I get the intention. At least they're trying to put forward some goodwill. But I don't really think there's any appropriate place for the Confederate flag. Brad Paisley is a dumbass, and it makes me believe LL Cool J just doesn't know history very well.

It's been helpful to me to listen to comedians who make me feel uncomfortable, especially ones that are misogynists, and to find the good in them, too. But I get it. I get when you're marginalized, and you're constantly made to feel less-than ... but there comes a point where not everybody is your enemy.