Both Sides Going for Her

Less than nine years after Amy Schumer traversed into the fraternal disorder of stand-up comedy out of college, the innocent-looking yet racy Long Islander, 31, is one of comedy's hottest personalities. A veteran of NBC's Last Comic Standing and a lethal celebrity roaster, her debut comedy album, Cutting, was released in April 2011 and her second Comedy Central special, Mostly Sex Stuff, was the network's second-highest rated special of 2012 and garnered positive reviews. Additionally, Schumer has moonlighted as an actress on Curb Your Enthusiasm, Delocated, Louie, HBO's Girls, and the Steve Carrell-Keira Knightley film Seeking a Friend for the End of the World. The former Towson University theatre kid will precede the April 30 premiere of her new Comedy Central series, Inside Amy Schumer, with an appearance at the Paramount Theatre for this week's Moontower Comedy & Oddity Festival.

Amy Schumer: No. No, it was not. Having known that that would work, I would've done it; but it was completely not a device. I've always loved comedy. I've always loved stand-up, and I just wanted to try it, and I liked it a lot and really got obsessed with doing it. But there was no end game.

AC: You cite Dave Atell as your favorite comedian. You learned in 2009 that your babysitters as a child on Long Island were actually Dave's mother and sister. How do you explain this to yourself?

AS: Isn't that crazy? [Laughs] Like, I'm not somebody that has religion, but enough things like that have happened where the stars have kind of aligned in such a strange way that I definitely don't just think that was a coincidence; I think it's pretty incredible, and, you know, there's some higher something causing that shit.

AC: You finished fourth on Season 5 of NBC's Last Comic Standing. Is it fair to say you've "won" in the end because your ensuing success has dwarfed the other finalists?

AS: Um, [laughs] no. That would not be fair to say, because that would mean that I was still in some way in my mind in competition with those guys: which would mean I was insane. I would never say that; and, I mean, I think everybody's doing pretty well that was on my season. Actually, I don't know; but I mean, Lavell Crawford's still killing it and [Jon] Reep; and, you know, they're all married and have kids and are surrounded by unconditional love, so. I just have, like, my stuffed animals and a new rolling suitcase. So, I'd say we probably even out.

AC: In high school, you were voted "Class Clown" and "Teacher's Worst Nightmare." Because of your reputation as a teenager, did you have an inkling that someday you'd be called upon to roast the likes of Charlie Sheen and Roseanne Barr on basic cable?

AS: Absolutely not. I think like most kids that sort of have an affection for comedy, I thought the opportunities weren't that big. Back then it was like, you thought, "I'll be on Saturday Night Live one day maybe," or have a television show. I definitely always knew I would wind up doing something with ... I knew I'd be a performer, and I knew I would be making people laugh; but I never thought I would do a roast. I just loved watching the roasts: I would memorize people's jokes; [Greg] Giraldo was my favorite. Yeah, I honestly only got the idea to do a roast about a month before I did it.

AC: As a female comedian who's "really slutted around" and jokes a lot about promiscuity, what kind of antagonism have you received as a result?

AS: You know what? Nothing. This is the first time. [Laughs] I think the worst I've gotten of it – unless I'm not remembering something – sometimes when I would arrive at a comedy club, the owner or the co-owner, would ... I don't think that they thought they were gonna sleep with me, but they would definitely think that I would wanna get drunk and hang out late. But, you know, I wanna get a good night's sleep so I can perform the next night. You know, I'm pretty focused. I'll definitely have some drinks, but I don't, like, black out anymore, and I wouldn't go out late with the club owner or anything like that; so, I think the casualness and maybe some of the lingo I've been addressed with at clubs. Even people on Twitter, I think the jokes are funny; so, like, when people leave jokes about me being slutty or something, I just laugh. That's what I've put out there.

AC: You're 31 now: How much residual teenage girl ethos – character or personality – feeds into who you are and what you perform?

AS: Thank you for explaining "ethos" to me. [Laughs] You know, I definitely have a lot of my younger self still a part of me. Like, the things that I travel with – like, I'll read The Hunger Games books and watch Real Housewives and stuff like that; so, you know, I'm not a fully adjusted adult. But you know, I also have a financial adviser and nice clothes. I got both sides going for me.

AC: The format of your upcoming Comedy Central series, Inside Amy Schumer, looks reminiscent of Chappelle's Show. What's the framework of the series? 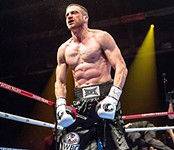 Our Most Anticipated Movies of Summer 2015
The summer movie season has begun, and we've got opinions 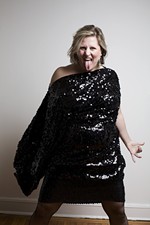 Fired Up
Bridget Everett is bringing the good times to Moontower, so you best be ready