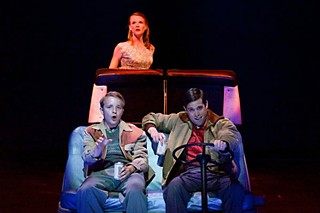 We got the Beat: Jon Cook's Rich, Jacob Trussell's Danny, and Erin Barlow's Honey have Kerouac and Cassady in their headlights. (Photo courtesy of Kirk R. Tuck)


Possibly no image better encapsulates the spirit of the 1950s Beat Generation than a carful of kids heading west, away from their pasts and in search of something unknown. The world premiere of Steven Dietz's Mad Beat Hip & Gone at Zach Theatre is largely built around this notion of being strung between two places, never quite at home in either.

Danny (Jacob Trussell) and Rich (Jon Cook) are two fictional young guys who are out one night at a bar in Cheyenne on the same night that Jack Kerouac happens to be passing through. Kerouac, whom we never actually see onstage, cock-blocks Danny and then heads out of town. Danny and Rich decide to follow after Kerouac and his buddies to give them a piece of their mind, and they find themselves pulled after the Beat writers like tin cans tied to their back bumper. On the way, they meet and both fall for Honey (Erin Barlow), who has taken up with the Beats as she searches for her own answers: why her mother disappeared first from a seemingly normal life, and then again off the side of the Golden Gate Bridge, leaving behind only a map for her daughter to follow.

Seeing average guys like Danny and Rich swept up in the same cultural storm as the Beats and then deposited in very different places, is an interesting concept. The actors draw out the story well, as directed by Dietz. Trussell especially does fine work in navigating the divergent performance styles called for in the play: realistic dialogue (one of Dietz's strengths as a writer) and seemingly extemporaneous poetry, with a saxophone playing along (played by the awesomely named Topaz McGarrigle).

The story itself is not so clear. The challenge inherent in writing a coherent stage play around the Beat Generation, whose prose and poetry wanders in an experimental amble across the page, is obvious. How do you pin a story down in a context that resisted being pinned down? Do you imitate their poetry or make it about their lives? Despite the semi-autobiographical nature of Kerouac's writing, doing both is not easy. As a result, Mad Beat Hip & Gone comes off as less cohesive than might be helpful for a space as open as the Topfer. Equally, the set (Michael Raiford) and lights (Michelle Habeck) create interesting movement in the space, like major pieces that fly in on the diagonal. But by the end, the space remains hazy and poorly defined.

Mad Beat Hip & Gone is perhaps best considered as an experiment. The writing of the Beats has its place in American literary history, although rarely are the writers considered among our greatest. Similarly, Mad Beat Hip & Gone is an effort at reaching into an artistic territory that is different than most of Zach's productions, and arguably different than a lot of Dietz's work. What ideas might be opened up as a result could wind up being more significant than the play on its own. 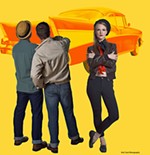