If you're in the theatre community of Austin, Texas, you are, to one ex- tent or another, in this play. And you're probably going to die – in this play.

Of course, you're going to die outside of the play, too, eventually – and that's what Physical Plant Theater's Adam Sultan is about. Or, rather, it's about a man trying to find something still worth living for as he ages, and his friends – his beloved wife among them – die off one by one by two by three as the years go by. Adam Sultan is that man, that character whose life we witness here, and he's based on and played by the real-life Adam Sultan.

This thing is about as inside-baseball as a local play can get, with many in the audience among those whose names and causes and times of death are voiced throughout the course of the narrative. This play celebrates the relationships that grow and change between people who make theatre and commit art, and it is itself an example of those relationships – which is acknowledged at the end of the play. But we're not there yet, we're still at the beginning, even though both that beginning and the end are set against a portion of the front of Salvage Vanguard Theater, reproduced at full scale and looking very like the SVT you just entered. And then that faux-front is divided and carried away, and the play begins.

Look: There's the married couple, Karen and Adam Sultan, standing side by side in their small home, being aged by a team of masked and black-clad stagehands, their clothes changing, their bodies shifting, decades tumbling by as the names of newly dead friends are announced one after another.

Look: Adam's collecting mementos of his deceased loved ones, personal objects which he consigns to jars. He's grown obsessed with this task, has created a device to ease the process, and the jars are beginning to crowd the shelves of his house as surely as accruing sorrows are crowding his memory.

Look: There's a puppet of Adam Sultan entering the house, confusing and unnerving the flesh-based Adam. The puppet's brought to life by those same stagehands-in-black who were manipulating the married Sultans through time; behind those masks, the puppeteers are members of Trouble Puppet Theater Company, so, yes, the movement of this articulated faux-Adam is astonishing.

Look: Ellie McBride is excellent as the elderly Adam's alcoholic nurse, Linda. The living Noel Gaulin is perfectly cast as the dying Noel Gaulin. Kelli Bland is as delightful as ever, playing Kelli Bland. The lighting, the sound, the set, the costumes, the – ah, Jesus. This is supposed to be a review about a play that's about the Austin theatre community, produced and performed by people in that community, and your reviewer happens to be among those people, and I hope you don't mind but I'm going to go get a Kleenex because thinking about this fucking thing has the tears running down my cheeks and eroding most of what passes for critical objectivity. 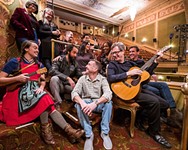 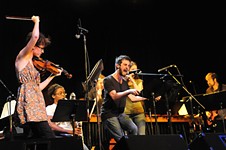