For the third time, the Austin Symphony gives Texas composers under 18 a chance to be heard 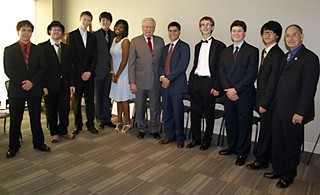 The 2012 class of Texas Young Composers, with Jocelyn Chambers fifth from the left (Photo courtesy of Austin Symphony)

With the exception of a few select superstars in the classical music firmament, composers who write orchestral music can almost expect that it will never be performed by a major symphony – especially if the work lasts longer than 10 minutes. Assembling an orchestra is quite a production, and rehearsal time (all the more needed for new repertoire) is expensive for such a large ensemble. Why risk alienating subscription-holders if you can guarantee smiles with Beethoven's Fifth?

How, then, can orchestras shed the perception that they're out of touch when their sense of "varied repertoire" is to cycle through the Killer Bs (Bach, Beethoven, and Brahms)? On April 3, the Austin Symphony makes a brave foray into the new music scene with an evening of world premieres. This is the third Texas Young Composers Concert, a program that provides the thrilling opportunity for young composers (under 18) to hear their works performed by the ASO.

One of the 10 composers featured on the program is Jocelyn Chambers. When she won the competition last year, she became both the first African-American and the first girl to win. "I was the one in the dress amidst the suits and ties," the Austin native says. This year, the program includes two other girls, Justine Maeurer and Sophie Mathieu, and Chambers is excited about the additional female company.

Chambers started playing the piano at age 7. When she was 13, she began composition lessons with Rachel McInturff at the Armstrong Community Music School. She aspires to be a film composer and plans to win an Oscar for Best Original Score. "Paradise," her piece in the upcoming concert, describes the torrid journey of romantic love, with the couple starting "literally inseparably," but almost breaking up in a moment of great tension. At one point, solo violin and solo cello voices represent the woman and man in the relationship. She becomes serious for a moment. "Good times don't make a relationship. Happiness is not something handed to you on a silver platter; it's earned and attained."

For the composer of such a weighty subject, the 16-year-old beams with effervescence and a girlish excitement. At the cafe where we met, she asked for the drink with the fanciest frothy designs (a hot chocolate) and took at least 100 photographs of it. She's an avid baker, blogger, photographer, and writer. As an usher at the Long Center, she goes to many performances. (About the Austin Lyric Opera performance of The Marriage of Figaro last month, she quipped, "Nobody died, so that was amazing.")

ASO Executive Director Anthony Corroa says the goal of the program is to "encourage young Texas composers and nurture future masterpieces." The infectious enthusiasm that Chambers expresses for classical music is enough of a reason to support this program, and new music in general.