Painting by day, sketching by night, in a small bedroom studio 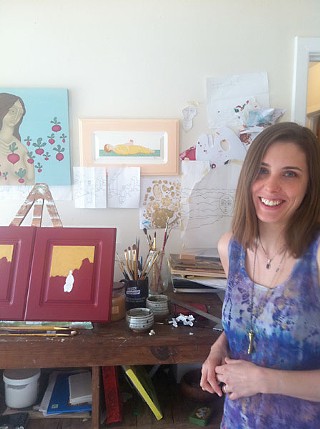 "The newer work is really focused on the abuse of nature, both human nature and wild nature," says Emma Hadzi Antich, thoughtfully pointing to a small luminous study painting as an example. In it, an oddly proportioned young woman wearing a white togalike shift gestures ambiguously; around her float vital organs (a heart, lungs, an eye) and plants (cut off at their stems, with roots attached). Her studio is a small, light-filled bedroom in a quaint house near Anderson Lane. And though her paintings are often small, Antich's studio is filled with these studies, sketchy drawings, and schoolwork – she's getting her master's in political science from Texas State University. Medieval Orthodox Christian icon paintings are a visual influence hard to dismiss, as Antich's figures are direct and stylized, often appearing on a gold ground. But the similarities end there; tiny men tie up a bearded sage by his own whiskers, and a woman and man have exchanged severed hands and look longingly at each other's stumps.

Austin Chronicle: What's on this wall?

Emma Hadzi Antich: This wall is inspiration – things I want to remember. A lot of my paintings start with phrases or poems or literature. [Grabs a leaf-shaped piece of paper with writing on it, reads:] "You are looking too thinnish to finish this fight" – that will probably be the title of a painting one day.

AC: How many paintings do you usually work on at one time?

EHA: Usually, I have three going on at the same time; right now, I have four. My process is to gesso the boards, and then I use a metal tool to carve into the gesso. And only then do I begin to layer paint up.

AC: Was this process of working on multiple paintings at once something that developed organically? Was is because you needed a break from certain paintings?

EHA: No, it's actually mostly a daylight issue. There are certain things I just can't do by artificial light, such as color-matching skin tones. It's really difficult to do anything like that at night; in fact, it's kind of impossible for me.

AC: So then, do you only paint during the day?

EHA: Well, there are some things I can do by night. I can sketch, and I can carve into the gesso, and gold accenting is easy at night. So I work on several paintings at once because I want to maximize my amount of working time.

AC: I notice you fold your sketches into ninths – what's that about?

EHA: Yes, I do that for many of them. But for this large painting, I've divided the painting up into mirror golden triangles and perfect squares. In doing that, I realized there was a lot in the composition pointing in the upper right corner, and it helped me develop new elements. 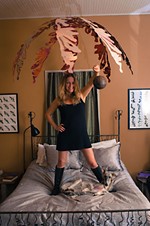