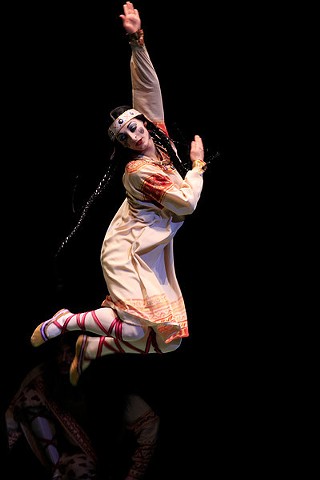 Death and the maiden: Joffrey Ballet's The Rite of Spring (Courtesy of Herbert Migdoll)


These days, I try to stay in on school nights, but when a ballet company the caliber of the Joffrey Ballet beckons, I am powerless to resist. The company, founded by Robert Joffrey with the choreographer Gerald Arpino in New York City in 1956, has existed in almost continuous iterations, building a reputation as a truly American, bootstrap ballet company that is as invested in remounting historical works, like The Rite of Spring, as in commissioning avant-garde ballets set to rock music.

Rite, the third work in Tuesday's triple-bill program, is a 1987 reconstruction by historians Millicent Hodson and Kenneth Archer of the 1913 Nijinsky ballet whose premiere was met with an audience riot and which closed after only nine performances. Many scholars would prefer that I put "reconstruction" in quotation marks. Reconstructing choreography is impossible! they say. Memories are faulty! Renderings are incomplete! The music was performed differently! Stravinsky's intentions did not match Nijinsky's! There were only nine performances! Regardless of the reconstructed ballet's likeness to the original, though, its effect, I believe, has been restored, only faded by the passage of time. The ballet scenario – a maiden sacrifice in a primitive, unyielding society – danced by flat-footed villagers whose relentlessly constrained and repetitive movements and costuming seem, at times, as clownlike as they are primitive, is a downer. In the words of French critic Jacques Rivière, writing in 1913, "It is a wreckage of the past, crawling with and eaten away by familiar and monstrous forms of life."

Nevertheless, it is requisite stuff, and every member of the packed house now has a better frame of reference for dance history as well as the groundbreaking score, thanks to the dynamism and rawness imbued by the University of Texas Symphony Orchestra, conducted by Scott Speck.

I was thankful that Rite was preceded by two contemporary ballets, which showcased the company's style: simple, solid technique, yet breaking the line at the hands and feet, like pronounced serifs, for a melting effect. Stanton Welch's 2012 Son of Chamber Symphony, a three-part work for 16 dancers to John Adams' composition of the same name (recorded music was used), was a cool, athletic mash-up of images from classical ballets and neoclassical movement.

Christopher Wheeldon's 2005 After the Rain, second on the program, is an oft-performed two-part work to music by Arvo Pärt. In the first section, three couples in gradient-blue leotards and tights dance furiously. I enjoyed Yumelia Garcia's richness of mood; she allowed herself to smile, as though she knew "the rain" was catharsis, also a part of life to marvel at. The second section, the "after," is a lovely duet for one of the couples. Danced by the lithe, supple Victoria Jaiani and stately-yet-attentive Fabrice Calmels, it was the kind of thing that makes you soften your gaze and lean forward in your seat. In barely-there costumes and soft ballet slippers, under warm peach lighting, their tender duet was both sweetly ideal and human. In many ways, it was the opposite of Rite of Spring.