The Girl With Time in Her Eyes 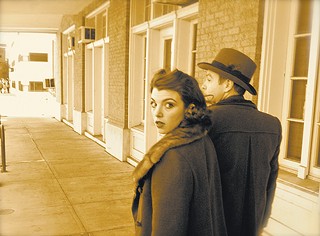 Out of the past: Julia Lorenz-Olson and Toby Minor are history in The Girl With Time in Her Eyes (Courtesy of Beth Burns)

The Girl With Time in Her Eyes


From under the screen bearing the Beaumont Scientific name and creed ("making tomorrow easier today"), scientist George Clayton served up a patter that sounded right at home on the floor of the South by Southwest trade show: how revolutionary the new tech he'd developed was, how excited he and the research firm he worked for were to debut it at SXSW Interactive, how what we were about to see would change the world. And his subsequent explanation of the AU-370 – a device that could tune in resonant energies left in objects from highly emotional past events and resolve them into physical manifestations – had just enough scientific logic and technobabble to sell the notion that, once it was "tuned" to the antique clock, radio, desk, and office supplies behind him, Clayton would be able to show something that happened in that very spot 65 years earlier. Yes, it was a play, and everyone at the Next Stage in the Austin Convention Center on Sunday knew it was a play, but up to the point that Clayton and his associate, Dr. Hamner, switched on "the Tuner," The Girl With Time in Her Eyes had generated its own resonant energy: that tingling sensation that comes from a theatrical illusion convincing enough to make you almost doubt your senses.

Alas, with the appearance of the AU-370's manifestation, the tingle faded. The replay of a double murder in the office building on the convention center site in 1947 came from three actors in period garb who just stepped out from behind the curtain ringing the space and onto the stage – an entrance so conspicuous that it dissolved the illusion of some fantastic vision. That's not to fault director Beth Burns or anyone who worked on this Hidden Room Theatre production; any stage magic that might have made the scene more persuasively "real" was all but impossible given the unforgiving fluorescents of the exhibit hall and roar of the trade show bleeding into the space. The environment that gave Judd Farris' address as Dr. Clayton such verisimilitude worked against the rest of the dramatic presentation.

But then this techno-noir managed to accomplish another neat trick – a bit of theatrical wonder achieved, fittingly for the setting, through technology. When it appeared that the Tuner's use had somehow created an opening between past and present, and had actually altered history, Dr. Hamner – a concerned Robert Matney – invited audience members to scan QR codes linked to the objects holding the resonant energies and help him discern what had occurred. Each code connected to an information source beyond the space – texts, websites, email addresses, phone numbers – through which you could uncover another piece of this story's puzzle. Suddenly, people were holding smartphones to screens, reading messages and watching videos, and even sharing their discoveries with one another. What had been a self-contained theatre piece became a mystery spread across cyberspace that a group of strangers worked to solve collectively. Now that's magic – maybe revolutionary, too. Here's hoping Hidden Room builds on it. We'd like to see The Girl With Time time and time again.