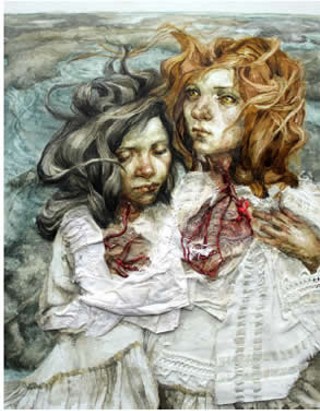 Seaside by Blood, by Megan Kimber


This new show at grayDUCK Gallery, just off South First Street in the bustling and culinarily bountiful Bouldin Creek neighborhood, features the work of three artists: David Ball, Jennifer Davis, and Megan Kimber. This show, says the gallery statement, "explores the spaces between reality and imagined perceptions, where characters bear witness to an internal narrative of memories and relationships."

Davis uses acrylics, graphite, and charcoal for her series of scenes on panels, scenes as dreamlike as their colors are muted – and their colors are beautifully muted, presenting various animals and children in strange tableaux. (But: The tiger! Davis' portrait of a tiger is equally subtle of hue, except for – oh! – the shining gold stripes that radiate regal patterns of power from the beast's calm face!) Ball works in collage and mixed media, and it's his work here that most shores up one's expectations of continued grayDUCK excellence. Because, collage? Aren't there so many easy ways in which collage can be – and often is, regardless of where it might be displayed – done poorly? But Ball's work is collage that Dave McKean could be proud of – though it's not like that maestro's style at all. This is painterly and paint-amplified collage, intricately arranged, of figures and situations bolder and more nightmarish than the dreamy tones of the Davis paintings on the nearby walls. And then there are the creations of Kimber, whose ink-lined and ink-washed illustrations are akin to things created by some slightly less fey but equally talented sister of Arthur Rackham – and enhanced by precise additions of fabric and other materials. Thus, the textures implied by these narratives are manifest in our actual three dimensions; the stories that we can only imagine are manifest in the brain's regions attending melancholy and the more ragged bits of childhood.

Gallery owner Jill Schroeder has curated an exhibition of three-times-wonderful art in the grayDUCK's spare and elegant space, offering views into a tripartite reality that's certain to intrigue and reward much contemplation.