Wendy Wagner: Look to the Left 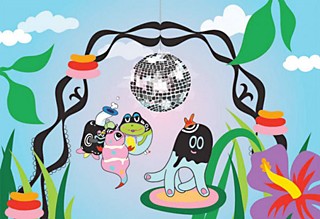 'Wendy Wagner: Look to the Left'


Women & Their Work's latest exhibition from artist Wendy Wagner is outright fun and rightfully so. In May 2012, as the show was beginning to evolve, the artist was diagnosed with a malignant brain tumor, and, during the course of her treatment, Wagner's sight in her left eye was impaired. "Look to the Left," as a title, is a nod to Wagner's newfound perspective.

As viewers enter the gallery, they are met with stills from Wagner's animations that depict characters frozen in inactivity but still radiating vibrancy. Several figures dance around a disco ball in Disco Forest while the scope of Wagner's vision is felt in the macro-view that her character witnesses from space in Outer Earth. Even without the context of the animations, the stills present a cohesive narrative about discovery and adventure. They are prime introductions into Wagner's cartoonish world.

The gallery opens to reveal the full breadth of the exhibition's ambition. Wagner's use of ceramics, animation, soft sculpture, painting, and illustration is impressive, for its scale and its cohesion. Plush representations of her characters, including the much-anticipated Tootie and Flying Snouts, sit with inviting looks. They invoke a sense of walking into a toy store, finding the perfect stuffed animal, and desperately turning to your parent with pleading eyes. You feel compelled to pick them up and swing them around the gallery. Wagner's animation loops depict fond images of pets, characters flying through space, and the world of dreams. The animations anchor the entire world of make-believe that Wagner has crafted. They are engrossing while incredibly lighthearted.

Wagner expertly appeals to a shifting demographic of art enthusiasts who have watched street art manifest as designer toys (see Kidrobot as a prime example) and are eager to find art translated into collectibles. The ceramics, however, seem like a lackluster afterthought to an otherwise meticulously planned exhibition. Regardless of whether you enjoy the whimsy Wagner has created, she should be lauded for the sheer detail that "Look to the Left" encapsulates.

From the beautiful paintings to the "Flying Snouts" beanbags that sit on the gallery floor, the entire exhibition feels like a Pee-Wee's Playhouse-Brad Neely hybrid. And yet, even with its obvious influences, the show feels wholly unique. As her characters carry their own identities, Wagner's own story becomes evident. "Look to the Left" stands as a celebration of escapism, from the harrowing diagnosis of cancer to a world still thriving with positivity. It is about renewal, energy, and eking a smile out of a bad situation.