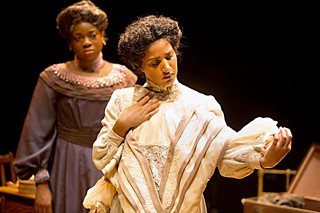 
In Lynn Nottage's play Intimate Apparel at the University of Texas Department of Theatre & Dance, the protagonist Esther (Mykal Monroe) sews undergarments for other women in New York in 1905. She touches their flesh with her laces and silks, but she remains alienated from their lives – by race, by class, and by simple loneliness.

One day, a letter arrives. A simple worker on the Panama Canal has heard of her. George Armstrong (Geoffrey Barnes) is lonely and would like to begin a correspondence. Esther agrees – only, she can't read or write. Her clients and friends help her out by transcribing and reading aloud letters to and from her suitor, which she carries with her every day. To Esther, the letters are possibilities that she – a never-married, 35-year-old African-American seamstress – might someday be loved by a good man.

Intimate Apparel operates on a line of tension between touch and separation. Bound by the restrictions of her time and place, Esther longs for genuine touch but is not allowed or can't accept it. Despite the upsetting ways in which the story eventually turns, there are well-meaning and fascinating characters in this play who equally desire a genuine intimacy. Esther's wealthy customer Mrs. Van Buren (Ann Pittman) is trapped in a loveless marriage. Her landlady Mrs. Dickson (Nickclette Izuegbu) is the widow of an opium addict, and her friend Mayme (Amanda Morish) is trapped in a life of prostitution. Esther's supplier, Mr. Marks (an especially engaging John Smiley), is the only person who shares Esther's deep love and knowledge of fine fabrics but, as an Orthodox Jew in his time, he cannot even allow his skin to touch hers. Esther is left to dream of a distant suitor, someone whose letters arrive from far away, and to wish that other impossible distances might be closed.

The set, designed by Jocelyn Pettway, reinforces the separations in the story. Each location is isolated from the others. Each character can only operate in certain places. Thanks to her trade, Esther alone can travel through all of these spheres. Wisely, the set includes all locations on the stage at once, preventing the kind of transitions that would interrupt the story.

As Esther navigates these places, we see her change from one sort of person to another. Under Melissa Maxwell's direction, the movement into a new identity is powerful. Monroe's performance as Esther makes her changes gradual and subtle, but they are also unmistakable by the end of the story. The honesty with which her character's story is presented is the gift to the audience for accompanying her through a lonely and sad journey.