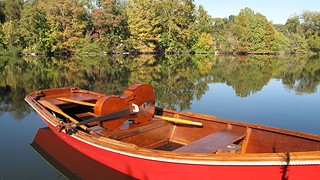 "The concert is about to begin, but you, the audience-explorer, do not find your seat in the auditorium. Instead, you are given a wireless headset and walk down the stone steps. A carillon of resonant bells are struck and bowed by musicians spread far apart, along the lakeshore. As you walk down toward the water's edge, you are also approaching the stage occupied by a lone performer. She plays from her seat on a small but sturdy wooden boat – cello and bow instead of oars. You can hear the music as a whole in your headphones as you explore the grounds or take them off and hear the acoustic sounds in each environment. Each member of the ensemble is playing a refracted solo in their own space. You might even be the only one there at the moment. Stay and listen a while, or continue on your way. The borders between the performance space and the rest of the world are permeable. The only indication that you are nearing the border is the static intruding on the radio signal."

This is how Austin composer Travis Weller describes the audience experience of his new work, Concerto Laguna, premiering Saturday, March 2, on the grounds of AMOA-Arthouse at – where else? – Laguna Gloria. The work is the first in the museum's Spring Sound Series, three events featuring innovative presentations of new music at its lakeside home. The series aims to do for the ears what the sculptures around the Driscoll Villa do for the eyes: take advantage of the glorious natural environment of this Austin landmark as a setting for art. In mid-April, AMOA-Arthouse will partner with Fusebox Festival for a Silent Disco in which guests will be able to boogie-oogie-oogie under the stars to specially programmed music only they can hear through wireless headsets. Then the last weekend of the month, artist Craig Colorusso will install around the property 20 Sun Boxes – solar-powered speakers on which he's prerecorded different notes played on a guitar that combine into chords. But before those come the steel bells and floating cellist of Weller's concerto.

Weller is a natural for the series, given his recent experimentation with site-specific music. During last year's Fusebox Festival, the co-founder of Austin's New Music Co-op created a chamber music work that took place throughout the Willow Spence neighborhood. The following month, he premiered a score in Houston that took place in seven different buildings of Project Row Houses. It was at that performance of "Seven in the Third" that Andrea Mellard, AMOA-Arthouse's senior curator for public programs and community engagement, approached Weller about composing a piece for Laguna Gloria. Having grown up in Austin, he was familiar with the setting.

"I've been to many events there," Weller says. "I always enjoyed the Creative Opportunity Orchestra concerts, and my wife Dorothy did a reading there for her master's thesis in poetry. After I was asked to write this piece, I spent some time there ruminating. Since one of my goals for this piece was to respond to the site, I decided to shift the focus toward what I see as its most essential attribute: the water. So for this piece, the soloist's stage is the lake itself. The ensemble of bell players forms an arc along the shoreline. Just as the shoreline envelopes the water, the sounds of the bells circulate around the cello part like an eddy. I'm very excited to be working again with Leanne Zacharias, the cellist. I don't think I'd be putting a cellist on a boat if we hadn't worked closely on another project in Washington state which also involved watercraft shenanigans." 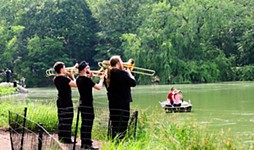 The Contemporary Austin
'Susurrus,' 'Music for Wilderness Lake' at Laguna Gloria offer art for the ears