Beauty Is the Best Priest: Short Plays of the Harlem Renaissance

Despite some flaws, this ACC Department of Drama production provides valuable insight into the Harlem Renaissance

Beauty Is the Best Priest: Short Plays of the Harlem Reniassance


We know that people attend theatre for myriad reasons and that a marketing piece that catches the eye of one theatregoer might be glossed over by another. For me, the intrigue factor carries significant weight in determining the theatre I want to experience. If I think a production is likely to be highly interpretive, creative, insightful, and/or unique, my interest is especially piqued. Such was the case when I ran across the title for the current collaboration between the George Washington Carver Museum and Cultural Center and the Austin Community College Department of Drama: Beauty Is the Best Priest: Short Plays of the Harlem Renaissance.

First, there's the title – not your ordinary marquee fare (the program notes include a very interesting explanation for this choice of title). And the subtitle was equally attention-grabbing; I knew little of the dramatic literature of the Harlem Renaissance, and the opportunity to delve into an unknown area of the theatrical landscape ticked another box on my "must-see theatre" list. And I left the Boyd Vance Theatre on Saturday feeling that I'd learned a great deal indeed. Between the highly informative program notes, some fantastic characterizations from several of the actors, and the creativity in the four plays themselves, I felt my intellectual introduction to this literature had been a strong one.

The heightened concepts were intriguing, though in many instances, there were sharp disconnects from concept to execution. The four plays were woven together with various interludes – a wise choice – but not with a clear sense of how the particular interludes fit into the tapestry of the plays. While some actors clearly understood the stylistic characterizations and conceptual frameworks at play, not all did, resulting in an unbalanced product where the stellar physical and vocal choices of a few made one yearn even more for such heightened portrayals throughout the cast. (Individual actors were not identified in the program.) But this wasn't a misstep only on the part of the performers; the directors didn't always make clear whether they had a specific referent for each highly conceptual choice, and several metaphorical interpretations felt adrift.

Despite these sometimes confusing and disjunct moments, though, many great things are happening on the Boyd Vance stage thanks to all involved in this project. Like a living museum inside a more traditional one, the cast, crew, and producers gifted me with new insight into a world of literature with which I'd had little acquaintance. To me, that is a thing of beauty. 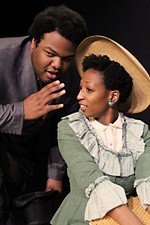