Exhibitionism: Frankie and Johnny in the Clair de Lune

Not much happens in Terrence McNally's play, but in staging it, FrogDog Productions makes a very fine debut

Frankie and Johnny in the Clair de Lune


One day a few years back while co-teaching an acting class, I remarked to some students rehearsing their scene that "it's not interesting to watch people do utilitarian things onstage." Although it was an off-the-cuff reaction to their acting choices in that moment and I haven't thought much about it since, I was reminded of this observation as I took in FrogDog Productions' debut production, Frankie and Johnny in the Clair de Lune – except that this time, my reaction didn't regard matters of acting. The prolific Terrence McNally's play about two middle-agers finding one another and themselves in the course of an evening is well-cast, well-directed, and well-acted in FrogDog's rendition. It's just that the play itself is, well, pretty uneventful. And while everyday situations can turn intriguing when you're dealing with the wordplay of Will Eno, the heightened dramatic conceptualizations of Thornton Wilder, or even the slightest twist of Arthur Miller, this play doesn't boast any of those elements. There's just not much to grab onto – or that grabs you – in terms of the material itself.

This is a shame, because Summer Lyn Bryant and Benjamin Weaver (who play Frankie and Johnny – respectively, of course) are such great fits for their roles, and they portray them well. Ronnie Dobel Prior's direction is both practical and smart, doing its best to create dimension from the fairly flat script. The set (unattributed in the playbill) is one of the best I've seen on City Theatre's stage, and Lee Reid's sound and lighting round out production aspects nicely. Aside from McNally's script, in fact, the production marks a very fine debut for FrogDog, one with a warmly homespun feel. (Bryant addresses her producer's note to "Cast, Crew, and Mom.") It's evident that this play has been brought to the stage by people who are passionate about this new company, and their connectivity shows throughout the production in sincere ways. Certainly, it's a production that deserves to be seen by far more than the 18 people present on the night I attended.

It's not that I'm not a McNally fan – the book of Ragtime, for instance, is stunning, and shows like The Full Monty illustrate his ability to make a "typical" situation into an experience that's anything but mundane. McNally is often a great playwright, but, Frankie and Johnny, there's only so much time you can spend talking about a sandwich. 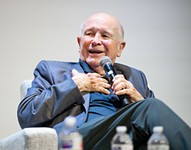 Terrence McNally Knows About Lasting Impact
About to open a new play at Zach Theatre, the Tony Award-winning playwright talks about what endures