Austin gets another taste of contemporary Russian drama, and so does actor Joey Hood

The Russians have Hood again.

That might sound like a headline left over from the Cold War or a plot point from the FX spy series The Americans, but it's actually a selling point for the 2013 New Russian Drama Festival, taking place Feb. 7-10, at Salvage Vanguard Theater. Highly prized and prize-winning Austin actor Joey Hood will again star in one of the contemporary Russian plays being presented in Breaking String Theater's annual event.

As in the two prior fests, audiences will be treated to both a fully staged production and staged readings of two dramas by playwrights working in Russia today, and John Freedman, an American who translates Russian plays into English when he isn't covering the Russian theatre scene for The Moscow Times, will again be on hand to provide background on and insight into the featured writers. (Freedman translated both Mikhail Durnenkov's Trash, given a staged reading by Beth Burns of Hidden Room Theatre on Saturday at 2:30pm, and Lasha Bugadze's Political Play, given a staged reading by Shakespeare at Winedale alum Bob Jones at 4:30pm.) New to NRDFest this year is a musical component: Golden Hornet Project will be performing Prokofiev's "Visions Fugitives," with pianist Willis G. Miller playing the original miniatures and Graham Reynolds and Peter Stopschinski leading a band in versions they arranged (Sunday, 8pm).

But the main attraction for this year's festival are two one-acts by Yury Klavdiev, a former street gang member with a penchant for poetry who now pens plays of outsiders battling to survive in a violent, often criminal society. Under the heading STRIKE, Breaking String Artistic Director Graham Schmidt stages Klavdiev's "Martial Arts" (adapted by David White) and "I Am the Machine Gunner" (translated by Freedman) – the latter starring Hood, who acted in Olga Mukhina's Flying in the first festival and the recent Breaking String production of Maksym Kurochkin's Vodka, Fucking, and Television. Here, he discusses what he likes about new Russia drama.

Joey Hood: On a base level, you're dealing with a completely different culture. I'm no expert now, but contemporary Russia is very trendy. In Flying, there's a lot of fashion and a lot of money – all that big-time Moscow oil money. But then you deal with certain aspects – like in "Machine Gunner," [the playwright] mentions a watch: A young man didn't know much about life; he didn't even have his own watch yet. And I picked up on that because in another play that we'd done, there was a reference to a watch. It signifies a coming of age. You keep track of your own time now. So things like that are unique. And there's a bleakness – a bleakness attached to everything – but when you get into the contemporary stuff, there's also a vein of hope that runs through it.

AC: So do you like doing these contemporary Russian plays?

JH: I do. Obviously, Graham thinks I'm doing something right, because he keeps asking me back. Flying was a beast. Vodka was a cakewalk. "Machine Gunner" falls somewhere in between. It's really, really dark, and once again, I'm trying to conquer the one-man mountain, and it's terrifying, so of course I'm drawn to it. But I really, really enjoy it.

AC: What makes "Machine Gunner" different from Flying and Vodka, Fucking, and Television?

JH: Flying was an exercise in the abstract. There were so many impossible aspects to that production. To pull off falling out of a window during the course of a scene that's happening onstage. How do you fall out of a window for two minutes? Vodka was an exercise in ideas – vices battling it out with each other – so there was a bit of the abstract there, too. This one is much more real. This is basically a confessional; it's more straightforward, more of a story.

JH: It gives a really unflinching view of war. You have a young kid who's the grandson of a World War II veteran – I play them both in their primes – and you get the impression that the grandson is basically an enforcer for the mob or some such outfit. He gets in his first gun battle and loses four of his best friends. And he sits down and looks at his watch because he's curious how long the battle had lasted. It had only lasted a minute and a half. And he says, "Fuck me, grandpa, how in the hell did you do this for four years if a minute and a half was like this?" It's really eye-opening. You also have the grandson coming to terms with the life that he's chosen. It's powerful stuff. 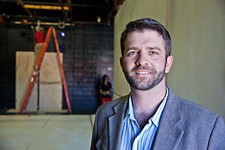