Which of Austin's arty geeks will take the title in this new live game show? 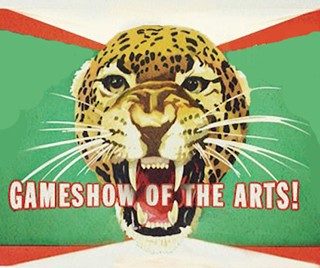 That's what they're calling it: the Greatness.

"They" are Michael Graupmann, Holly Lorka, and Phil West. Those three scenesters – oh, hell, can we use that word without it being derogatory? – those three will be coaching the show's competing creatives each month. But Graupmann, Lorka, and West aren't hosting the competition and its surrounding entertainments; no, that's someone else, and he's also the co-instigator ...

"Derrick Brown and I started brainstorming a new thing that would bring the rock & roll energy of Write Bloody into a stage show," says Graupmann, whose long-running Encyclopedia Show has helped prepare him for this geeky battle initiative. "The Greatness was the birthed result!"

Write Bloody is Derrick Brown's indie publishing company – as recently highlighted in the Chronicle (see "The Writing's Not on the Wall Yet," Dec. 14, 2012) – and it's Brown who's the host for the Greatness' monthly arts-battle night at the North Door.

"I thought this would be a brilliant way to cross-pollinate different art forms in Austin," says the former paratrooper. "We have a simple premise: You can play guitar or crack a joke, so what? Can you tell me what Aa is? Do you know how much a penny is worth? Can you launch 20 rolls of toilet paper across a room in 30 seconds?"

So this isn't necessarily some sedate and bookish sort of event, replete with leather elbow patches and frightening verse to a buck-toothed girl in Luxembourg?

"I'm a writer," says Brown, "and most folks I know would come to a reading if it wasn't so long – and if I could guarantee some fun or chaos. I love going to shows, don't love open mics, and would consider going to see a fire-spinner – but wouldn't want to devote two hours or so to just one thing, in case it blows."

And so that's where the "rock & roll energy" enters the –

"Our show takes three different art forms each month and pits them against each other," says Brown. "The audience votes for their favorite acts, choosing who goes to the final round, and that's the game show part of the night. We also throw in a twist where the competing artists have to beat one chosen audience member – for a chance at $100."

[Bonus: The host for the specifically game show part of the night? Ladies and gentlemen, it's Your Terrific Neighbors' own Curtis Luciani.]

And so, there you go: the Greatness – a new performance-enhanced trivia contest and geekalicious sparring match here in the ATX. With, as the first episode's competitors, Mindy Nettifee vs. Cristin O'Keefe Aptowicz, working the performance poetry; Kat Ramzinski vs. Ralphie Hardesty, bringing the stand-up comedy; and ColdTowne Theater's Star Force (Danny Catlow and Kyle Sweeney) vs. Super Apocalypse (Alex Baia and Brett Tribe), getting freaky with the sci-fi improv.

You wanna check it out for a night of cerebral entertainment? You maybe want to win that $100 prize for yourself, you scrappy brainiac?

Be there when the inaugural bout goes down on Thursday, Jan. 31, 8pm, at the North Door, 501 Brushy.