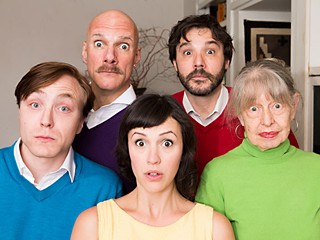 
Not much comes up when you Google Dick Price. According to the Internet, he's a lawyer in Fort Worth, the co-founder of the Esalen Institute, a lieutenant colonel in the Air Force. You have to dig deeper to find the Dick in question, but Matt Hislope is doing his darndest to change that.

In a delightful sequel to Rubber Repertory's lauded At Home With Dick (2005) and At Home With Dick 2 (2006), Hislope (with "creative consultation" from recently uprooted Rubber Rep co-founder Josh Meyer) has assembled a fine ensemble to pay tribute to Austin's premier composer of camp. In the first two installments, audiences were invited to follow Dick around his apartment for an intimate revue of autobiographical tunes. This time around, the song master isn't sitting center stage. In fact, on Monday night, he was sitting next to me in the audience, unabashedly singing along to the 24 ditties of Ordinary Peephole: The Songs of Dick Price.

As Chronicle Arts Editor Robert Faires has pointed out, it's unusual to hear Price's songs coming from anyone but Dick. Though the ensemble – Adriene Mishler, Mark Stewart, Jay Byrd, and Hislope, accompanied by Lyova Rosanoff on piano – are emphatically not Dick, they channel his energy. Few but Mishler could perform a bouncy song about bowel incontinence with a genuine grin. Byrd's greasy, desperate yearning for a fried pie was inspired, as was Stewart's grudge against that guy who called him a booger eater in seventh grade. Rosanoff expertly drove the whole shebang on a baby grand smushed into her cozy living room and uttered the show's best line: "Toast!" And, lest I forget to mention it, Hislope rocked the pants off the show's namesake, a confession from a voyeuristic neighbor: "Ordinary peephole, just a tiny little look/Into the muddled lives of Jerry Stiles and Betty Cook/I've been their next-door neighbor since the days of Elvis P./But I never knew them well 'til recently."

The revue is an expertly curated celebration of Dick's hysterical, gently scandalous oeuvre: a peephole into his brilliant life. Each song flows effortlessly into the next, even though they tackle subjects as diverse as Jesus, hillbillies, la Nouvelle Vague, and table manners. The melodies, which Rosanoff has reconstructed from recordings, are as contagious as the lyrics are acute. The most charming parts of the evening, however, are the answering machine interludes, culled with archival assistance from Keith Kritselis from cassettes that catalog the years of Price's Dial-a-Tune service.

Whether you called Price for a new song each day in the Nineties or mistook him for an attorney, you've gotta find a way to peep into this sold-out show. Hislope told the Chronicle that he hoped to "make other people love Dick as much as I do." Matt: mission accomplished.