If you want to talk sex, go to Georgetown.

Austin's neighbor to the north is probably not your go-to place for chat about the carnal, but it will be on Monday, Jan. 28, as Southwestern University hosts "Sex Talk: A Symposium With Benefits," a daylong exploration of what we talk about when we talk about sex – and why so often we don't talk about it.

This is the 35th Brown Symposium, an annual event in which scholars and experts are invited to the SU campus to lecture on and discuss a particular topic. Past Brown Symposia have considered sustainable agriculture, the human genome project, globalization, cosmology, the roots of Texas music, and the quartets of Dmitri Shostakovich, among other topics, and have included such guests as Nobel laureates Joseph Stiglitz and Rigoberta Menchú; authors Alex Haley, Isaac Asimov, and Carlos Fuentes; and the Girls Choir of Harlem. I know Dan Savage has yet to land a Nobel – any day now, Dan – but the country's foremost sex columnist makes for a pretty invaluable participant in any serious dialogue about sex today. Also in on the conversation are author and sex educator Debra W. Haffner, sex ed consultant Pamela M. Wilson, research scientist and founder of Mysexprofessor.com Debby Herbenick, and Austin artist Michael Mogavero.

Mogavero was invited to exhibit paintings from his series "Interludes" after showing some examples during a lecture he gave to Southwestern studio art students last year. Victoria Star Varner, the program chair, thought the paintings – which depict elaborate ornamental gates through which can be seen figures engaged in sexual activities – would fit well in a symposium about "Sex Talk."

"I was also intrigued by our current voyeuristic culture in almost all forms of media and entertainment. This prompted me to deliver these images in a seemingly hidden manner using gates and iron work to hide and reveal at the same instant. My love for film noir also prompted the structures and lighting effects.

"It became important for me to offer a sort of double seduction narrative to the paintings. While the sheer beauty of the decorative ornamentation is what first seduces the viewer, within seconds a different form of seduction comes to bear. This contradiction hopefully creates an atmosphere of beauty, mystery, and often an uncomfortable mix of delayed perceptions about what they are really seeing."

"When I have exhibited parts of this series in the past, the comments and questions have run the gamut of the sublime to the profane. To me, that range of contradiction mirrors the perfect pitch of my intentions. I think the paintings can be capable of opening a dialogue that speaks to our culture's rather hypocritical stance on what images the media teases us with and what morals and values are professed in light of the constant barrage of sexual connotations within every level of our society. I guess it could be a 'look but don't touch' dynamic."

"Sex Talk: A Symposium With Benefits" will take place Monday, Jan. 28, 9am-7pm, in the Alma Thomas Theatre on the Southwestern University campus, Georgetown. An art opening and reception for "Interludes: Paintings by Michael Mogavero" will take place at 5:30pm, with a gallery talk by the artist at 6pm. For more information, visit www.southwestern.edu. 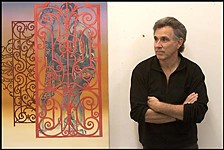