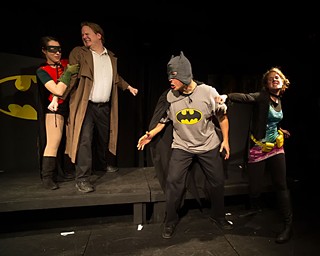 
Being a part of a fandom is serious business. Just look at websites like Tumblr, where countless passionate devotees of a given fictional universe debate endlessly on subjects like whether the X-Men movies or comics represent the true canon, or whether DC Comics undid years of important storytelling when it rebooted its lineup and gave Barbara Gordon back the use of her legs, or what exactly Shepherd Book's secret really was. Delving into these online fan communities, it's clear that some people's emotional investment in the characters they love is at least equal to what they might feel for, say, a family pet – especially if it's a gerbil or something. Fandom is important, in other words, which means that it's a perfect subject for an improv comedy series.

If you have never once contemplated the convoluted continuity of the X-Universe, the Hideout's Fandom: Improvised Fan Fiction in Your Favorite Worlds – running every Saturday night through February, with a different subject each week – is designed to ensure that you're not left alienated. Batman, Star Wars, Lord of the Rings, et al. have been adapted and their legends retold frequently enough that they're in the cultural consciousness, and the Hideout's cast, led by co-directors Kaci Beeler and Andy Crouch, seems to include both neophytes and experts among the performers.

In the Batman show, for example, the various interpretations of the Bat-mythos all saw their time onstage in the first act's short skits. The 1960s Pow! Biff! Wham! rendition had its moment, as Courtney Hopkin, acting as an entirely plausible villain called the Milk Maid, captured the Dynamic Duo. The dark Christopher Nolan version – with Aaron Saenz in the title role, after winning a bracket-style tournament of improv games to see who would claim the mantle of the Bat – was represented in all its hoarse-voiced bleakness. The Nineties animated version, with Halyn Lee Erickson gleefully putting on her best Harley Quinn voice, wasn't forgotten, either. That made for multiple points of entry, the better for Tumblr-style debates over which version is best.

After a first act of improvised sketches and games – including a fascinating bit in which players improvise scenes based on actual fan fiction from the Internet – the long-form storytelling begins. Built entirely on suggestions from the audience, the multiscene creation of a new piece of collaborative fan fiction is the heart of Fandom. The audience titles the story and votes on plots, and the directors interrupt the action to take ideas, leading to a story set in the fantasy world that both sincerely celebrates what inspires all of that passion and lovingly pokes fun at its absurdities. It may not be part of the canon, but this Fandom does right by its devotees.